KABC
NEWPORT BEACH, Calif. (KABC) -- Homes were kept dry Thursday night after crews raced against the clock in a Newport Beach neighborhood, where a partially knocked-down seawall let ocean water into the area, flooding the streets.

Contractors had knocked down an extra piece of seawall about a week ago as part of construction on a new house.

Area resident Amy Stoody-King was walking her dog Krissy around 8 p.m. Wednesday when she noticed the water starting to come over the job site.

"It was gushing," Stoody-King described.

She and Krissy were the first to notice that a high tide had breached the construction site, sending feet of water into the Finley neighborhood around Short and 36th streets.

Stoody-King quickly called police and alerted her neighbors. Almost immediately, the entire neighborhood got to work.

"It brought a lot of laughter and a lot of cheer. At the same time, a lot of frustration for some of the people who had houses that were flooded," DeClark said.

City of Newport Beach officials said more than a dozen properties had water damage, but most of it was minor. Two cars were also swamped.

Cleanup was underway on Thursday as residents hosed down the mess.

The contractors, with help from the city, raced to build temporary protection with sandbags before another high tide hit Thursday night. Neighbors gathered in streets that were under water less than 24 hours ago, waiting to see what would happen when high tide hit around 9:30.

While a portion of the newly built sandbag sea wall did fail, thanks to giant sand berms built on the property and some quick work once the waters began to rush, homes were kept dry.

"They're actually on it," said resident Mike Lloyd. "I think they're cleaning up somebody's mess. They're doing a really good job." 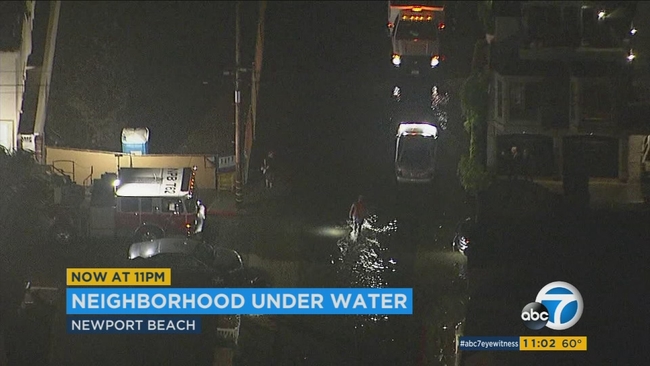