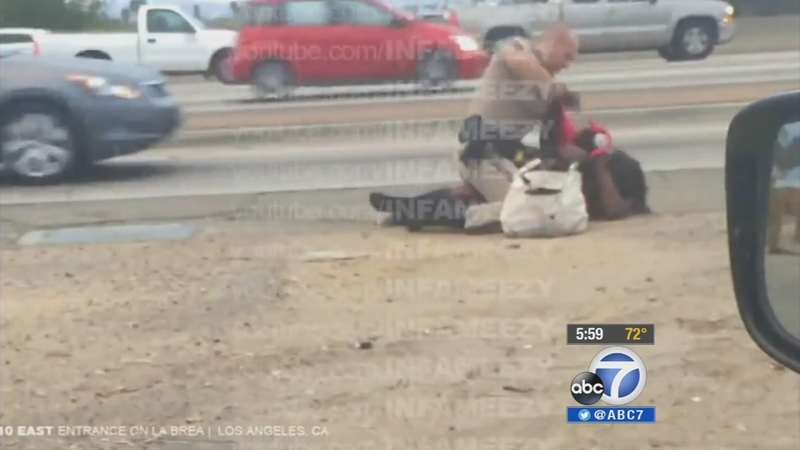 LOS ANGELES (KABC) -- Unnecessary and excessive: That's what one man is calling a fierce encounter he captured on video between a California Highway Patrol officer and a woman on Tuesday.

The video starts rolling right around 6:30 p.m. A woman walking on the eastbound 10 Freeway near the La Brea Avenue on-ramp is tackled on the roadside shoulder by a CHP officer. The officer unleashes a barrage of punches to her face.

David Diaz shot the video of the violent confrontation from his car. Diaz says he has no idea what spurred the beating, just that before he got his camera out, he saw the officer chasing the woman around a pickup truck on the on-ramp.

The truck pulled away, and Diaz started recording. Eventually another man runs over to assist the officer. Diaz assumed it was an undercover officer.

The CHP wouldn't talk with Eyewitness News on camera about this incident, but in a written statement, CHP said the officer ordered the woman to stop, but she ignored him. Fearing she would be hurt, the CHP says the officer tried placing her under arrest.

"A physical altercation ensued as the pedestrian continued to resist arrest, at which point a plain clothes, off duty officer assisted in applying the handcuffs," the CHP said in the statement.

But Diaz says he's still disturbed by the violent response of the officer. The woman didn't seem to be fighting back and could have been subdued in a much safer manner, he said.

"There was no weapons, it's obviously excess force at this point," said Diaz. "He could have easily calmed her down. You can use strength without punching."

The CHP said the woman refused to give her name. She was booked as Jane Doe and taken to a local hospital for mental and physical evaluation. According to a hospital spokesperson, she was treated and released on Wednesday.

A press conference was expected to be held Friday, a CHP official said.