KABC
By John Gregory and ABC7.com staff
PERRIS, Calif. (KABC) -- Firefighters on Friday morning contained a dramatic fire that raged for more than two hours at a pallet yard in Perris.

The 2-acre blaze was reported at 2:49 a.m. in the area of Webster Avenue and Ramona Expressway, according to Cal Fire and the Riverside County Fire Department. Fifty-eight firefighters from 18 engine companies responded to the scene.

There were no injuries, and no structures were threatened, fire officials said.

Firefighters reported "multiple explosions from propane within the compound," which initially limited their access to the center of the inferno.

Massive, wind-swept flames were visible for miles from the location, where two power poles also burned.

The blaze was contained as of 5:30 a.m., Cal Fire said. A dog was moved to safety after it was found wandering amid the smoke and ash.

Ramona Expressway was closed in both directions amid mop-up operations that were expected to last for several hours.

The cause of the fire was unknown. Arson investigators were summoned to the facility.

Friday morning's incident took place in the recent aftermath of fires at other commercial sites in the Inland Empire, including a pallet yard in San Bernardino and a cardboard recycling facility in Ontario.

Arson investigators are on the scene of a massive fire in Perris. Details on #abc7 pic.twitter.com/TFHNza1fPW 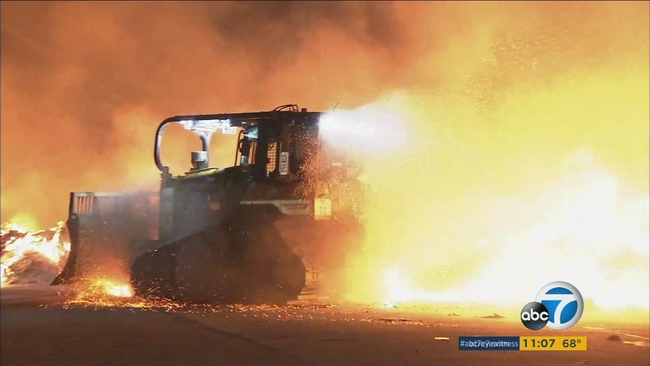 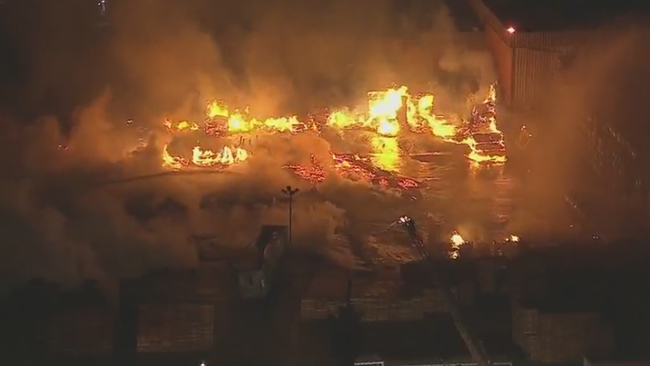