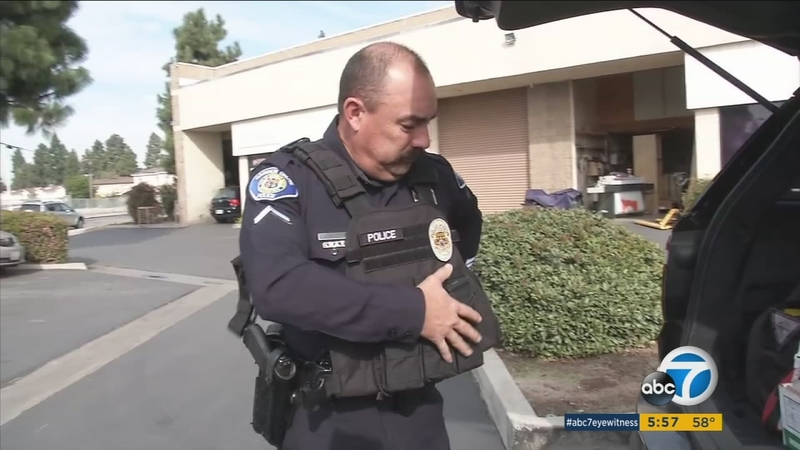 GARDEN GROVE, Calif. (KABC) -- When Garden Grove police officer Rafael Loera gets into his patrol car to go to a call, the same thoughts always go through his head.

"We're in the spotlight everywhere we go," Loera said. "Any building we enter, everyone turns their head. We don't know if they're for us or against us."

Loera says a reported rise in officers getting shot and killed on the job has him always looking over his shoulder these days. Now, he can add an extra piece of body armor to his uniform. The new armor is stronger than his standard-issue vest.

"He's providing added protection for them at no cost and that's huge," Loera said.

He's talking about John Tompkins, the co-founder of E614, a nonprofit based in Garden Grove. Tompkins and Jayne MacBride came up with the nonprofit because both have sons who are police officers.

Tompkins says the steel armor protects against most rifle rounds. Using donations, E614 sends the vests free of charge to officers who request them.

They've given out 194 nationwide, with more than 2,300 requests waiting.

"It was two days after the Dallas shooting - we received somewhere north of 200 requests in two days," said Tompkins.

Each set of two plates and a vest costs about $185. Tompkins is asking the community to do their part by donating on their website or a GoFundMe page.

He says 100 percent goes toward protecting those who protect us.

"Telling the police departments across the nation that the citizens care and we want to help," said Tompkins.