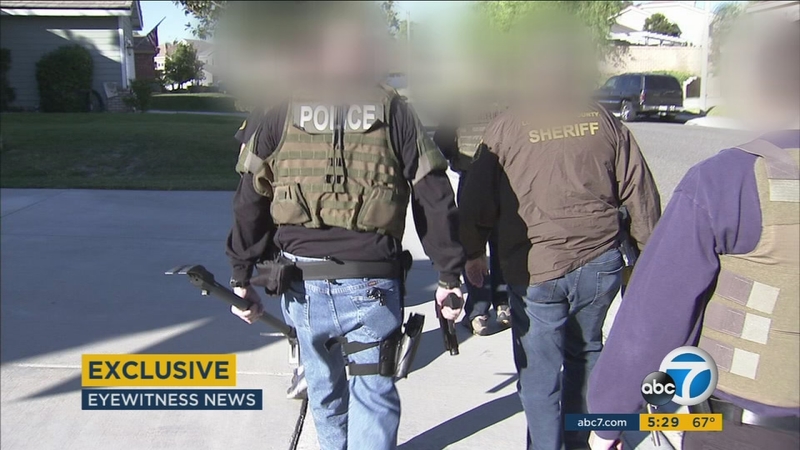 ABC7 was granted exclusive access to a ride-along with the task force while they were in action.

One of the first stops was a "no-knock" wake up call as deputies knocked a door down and entered a home believed to have child pornography inside.

"It's extremely difficult, we see the worst of the worst," Peter Hahn of the sheriff's department said. "If they're doing illegal activities and police come to their house, they may react in a violent manner."

Hahn, who is the leader of the task force, said child pornography is just the beginning and it sometimes leads to organized operations of human trafficking that exploit young girls.

He said most are local children from the community.

"The ones that are being trafficked on the streets are out of foster homes," Hahn explained. "They don't even need to be that, we have girls that are either runaways or they just go out on the street and they get picked up by somebody."

Hahn said it's about manipulation, as the people on the streets control the young girls with mental and physical abuse.

"The people doing them are good con-artists. They talk a good game, they befriend the girls and they are able to gain their confidence," Hahn said.

California is one of the largest areas for human trafficking in the United States. Between 2010 and 2012, the state identified nearly 1,300 victims.

"There's one thing being in this unit has helped me with is to be more understanding of my children and other children," Hahn said. "It happens, they get in over their head and they don't know how to get out and they just need somebody to help."
Related topics:
los angeleslos angeles countylos angeles county sheriff's departmentchild pornographyprostitutionhuman trafficking
Copyright © 2021 KABC-TV. All Rights Reserved.
TOP STORIES
Corona shooting: Anthony Barajas, 19, dies after days on life support
Bacon may nearly disappear in California as pig rules take effect
Villanueva: 'Grave concerns' over deadly shooting by deputies on video
The Abbey in WeHo requires proof of COVID vaccination or negative test
Bacteria at some beaches near Dockweiler continues to exceed standards
5-month-old baby dies after being ejected from car in Torrance crash
Judge recuses himself from rape case against OC couple
Show More
Venice homeless encampment: Crews continue cleanup as deadline arrives
Disney joins list of companies requiring vaccine for nonunion workers
Highway 38 reopens after mud, debris flow forced closure
CDC COVID map shows areas of high transmission in SoCal
Nonprofit helps veterans in LA navigate services
More TOP STORIES News