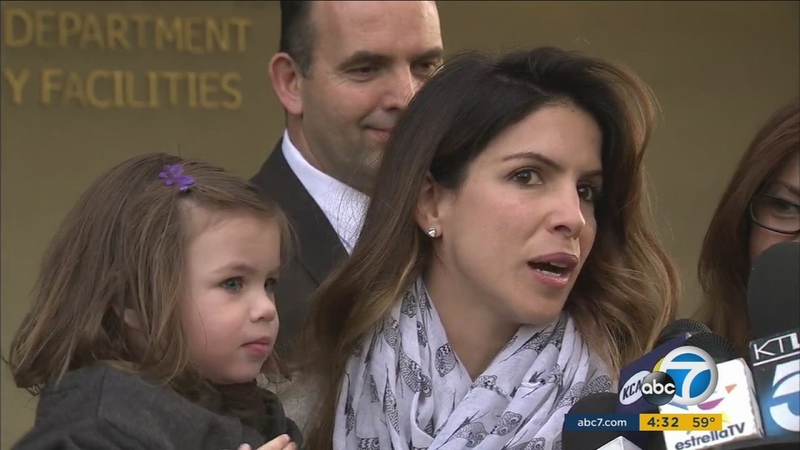 FAIRFAX DISTRICT, LOS ANGELES (KABC) -- A 2-year-old girl who was allegedly abducted by her father during a supervised visit near The Grove on Christmas Eve has been found safe in Palm Springs and reunited with her mother.

Elise Perry had her 2-year-old daughter back in her arms, after she was missing for five days.

Jack Perry, 31, was arrested in Palm Springs shortly after 9:30 p.m. Monday night after a witness called the Van Nuys Police Station three hours after police held a news conference. The witness recognized Jack Perry and his daughter, Lucia Perry, from a community flier she had seen.

Perry abducted Lucia on Christmas Eve, police said. The person who was supervising the visit lost sight of the pair in the 100 block of The Grove Drive in the Fairfax District at about 5 p.m.

The witness alerted police about their whereabouts at her apartment complex for the past two days in the Palm Springs area. When authorities arrived, the suspect tried to sneak out the back of the complex with Lucia, but police were waiting for him and took him into custody.

"As soon as we contacted them, within minutes, they rushed and met me at the place where they were found," said the unidentified witness. "We worked together on figuring out what the best way to find them was."

The suspect had also allegedly rented an apartment on Sunday using a fictitious name.

The child's mother Elise Perry said she was grateful to the public, the media and law enforcement for spreading the word so quickly about her missing daughter.

"I, honestly, I've never felt so happy in my life," Elise Perry, filled with emotion, said at an afternoon press conference. "I just want to thank everybody for taking the time to look at her photo and, you know, and for social media. Everybody kept re-posting... the Palm Springs police - I just can't thank you enough."

Authorities were worried that Perry, who is a British citizen, would take Lucia to London since he has access to private aircraft and had threatened to take her out of the country before.

Elise Perry said she did not know what her ex-husband's intentions were, but she said that he had several suitcases packed, and it did not appear that he was going to be returning back to his Santa Monica home anytime soon.

Police said he was upset about the custody arrangement.

"He was upset, frustrated with the system, and he felt this was the only way to get it right, is by taking this into his own hands," said Lt. Jim Gavin of the LAPD.

Perry was booked on child abduction charges. He is being held on a no bail warrant out of Miami-Dade County.