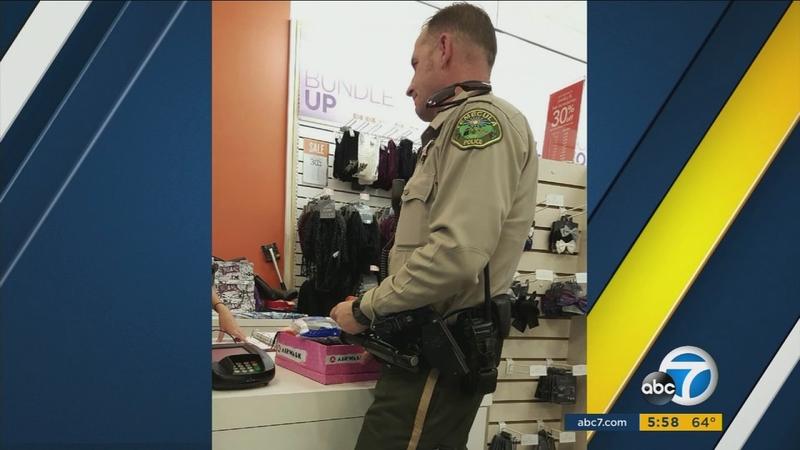 TEMECULA, Calif. (KABC) -- An act of kindness from a Temecula officer helping a homeless woman has gone viral.

It was just another day at Promenade Temecula, with Officer Bruce Pierson making the rounds, when he received a radio call about some kind of dispute between mall security and a homeless woman who was only 18 years old.

The accusation was that the woman had been spotted peering into parked cars in the parking lot.

"It was a heated debate," Pierson said. "She explained that I wasn't doing anything wrong, I'm being harassed."

The woman explained that she was using the shade of the cars, so as not to walk on the hot asphalt.

"And then raised her feet up and showed me her feet, which were as black as my boots and calloused," Pierson said.

The woman had no shoes and explained she hadn't worn shoes in weeks.

"I said well let's just calm down here. Let's go get you some shoes," Pierson said.

Instead of continuing the interrogation, Pierson walked the woman into Payless ShoeSource to buy her a pair of shoes.

"She was actually taken aback by the whole thing, almost dumbfounded that a cop was helping her out," Pierson recalled.

Pierson wasn't aware that his act of kindness was about to go viral, as mall customer Joshuah Rounds posted pictures of the event on Facebook.

"It was pretty amazing to me to see an officer, especially on duty, in uniform, to take time out of his day to just help her," Rounds said.

That's when other customers also stepped in to help as well.

"I didn't look at it that a cop was doing anything to get recognition. I did it because I wanted her to have shoes. She's homeless, the season will be cold, the rain is coming and she needed shoes, so I took care of it," Pierson said.

Since the story went viral, many people have asked how they can help the homeless population in Temecula.