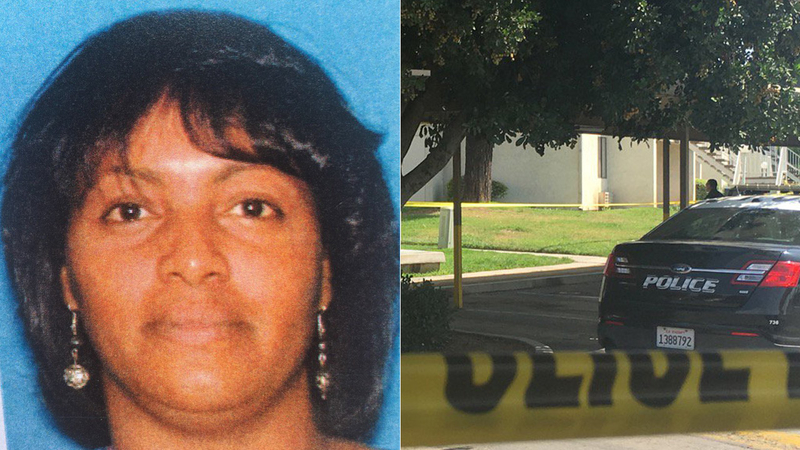 COLTON, Calif. (KABC) -- A grandmother was being sought after she allegedly stabbed two of her young grandchildren, one fatally, and her adult daughter on Monday morning in Colton, authorities said.

Authorities received a 911 call at about 9:10 a.m. from a "hysterical" woman who said her mother had stabbed her and the caller's two children in the 1400 block of Santo Antonio Drive, the Colton Police Department said.

Officers responded to an apartment building at the scene, where the suspect and victims apparently lived together in one of the complex's units, according to police.

A neighbor said the injured woman was covered in blood after suffering multiple stab wounds.

A 18-month-old girl was killed in the attack, investigators said. Her older sister and her mother were transported to a hospital in critical condition.

Neighbor Tim Hill witness the injured woman run down the apartment stairs and said he knew something was wrong.

"The grandma was right behind her, literally coming down the stairs with the bloody knife in her hand, trying to finish the job. I said, 'You're mother did this? And she said, 'Yes, she's bipolar schizophrenic.' And she said, 'Go get my babies,'" recounted Hill. "I looked and I seen, literally, six stabbing marks on the child's back and the child was sitting there, lifeless, and it was the worst thing I've ever seen."

Police said the suspect, identified by authorities as 43-year-old Nicole Darrington-Clark, is mentally ill. She was convicted of attempted murder after trying to kill two family members more than two years ago. She served her time at Patton State Hospital.

Colton Police say the vehicle is a 2013 Hyundai Sonata, like the one seen here pic.twitter.com/egfJVrwA0n

Darrington-Clark was said to be driving a black 2013 Hyundai Sonata sedan with license plate No. 7TQL009. She is described as an African-American woman who stands at 5 feet, 9 inches tall with short black hair and brown eyes and weighs about 210 pounds.

Police were investigating an apartment fire in nearby Victorville Monday night. Witnesses said a woman matching the description of the grandmother may have set it ablaze but that description was not confirmed by police.