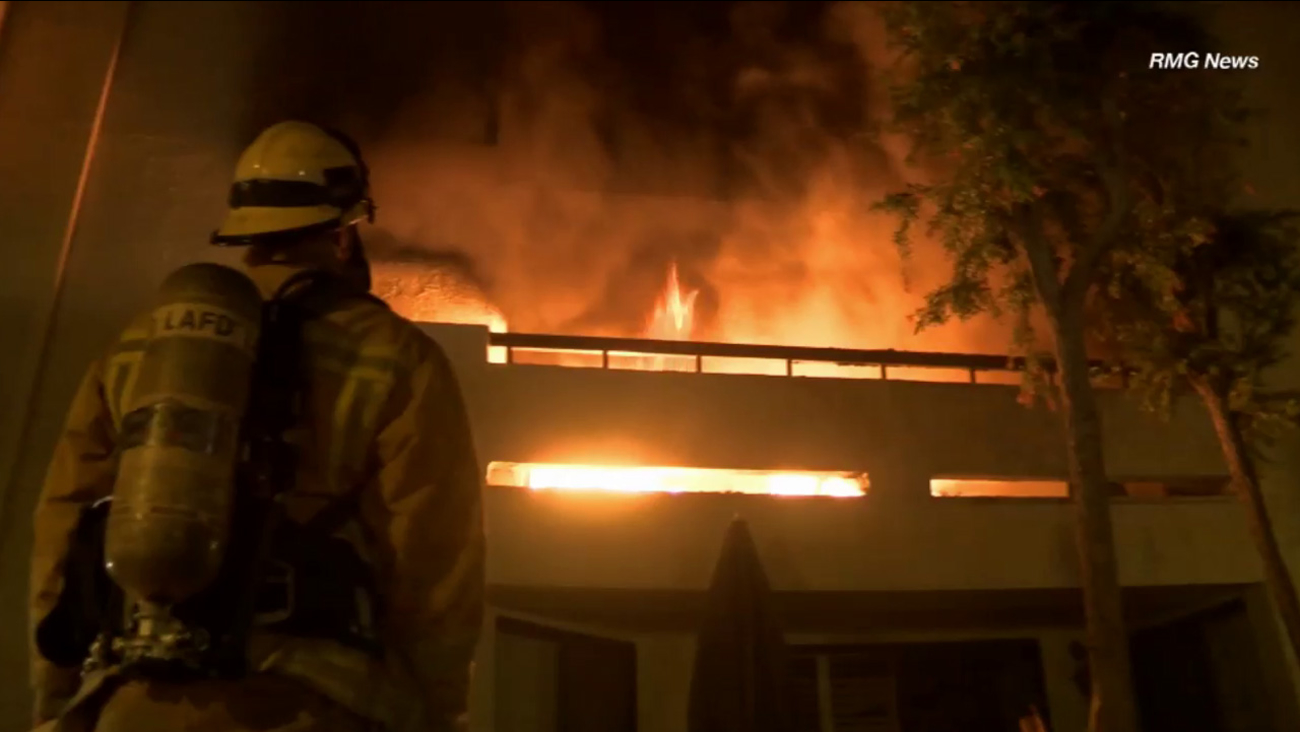 Los Angeles firefighters knocked down a fire at a four-story building near Burbank Boulevard and Owensmouth Avenue in Woodland Hills Saturday, April 25, 2015.

WOODLAND HILLS, Calif. (KABC) -- A woman in her 40s was killed after a fast-moving fire ripped through her condominium in Woodland Hills Saturday night.

The blaze broke out in a four-story building near Burbank Boulevard and Owensmouth Avenue just after 9:30 p.m.

An adult male resident, who is related to the victim, was rescued by firefighters and transported by ambulance to a local hospital in serious condition. He sustained a severe burn injury and smoke exposure, firefighters said.

It took 49 firefighters 24 minutes to knock down the flames, and the damage was contained to one second-floor unit.

During the fire attack, firefighters discovered the body of a woman. She was declared dead at the scene. Her identity has not been released.

The cause of the fire has not been determined, but investigators have declared the blaze to be accidental in nature. Monetary loss from the fire was estimated at about $500,000.
Related topics:
woodland hillslos angelesfire
Copyright © 2021 KABC-TV. All Rights Reserved.
TOP STORIES
LAUSD to require COVID-19 testing for all students, staff
Lakers to acquire Russell Westbrook, ESPN reports
Garcetti signs plan to restrict homeless camps
Video: Fight breaks out on 60 Freeway in Ontario after crash
How to convince someone to get the COVID-19 vaccine
Downtown LA venues welcoming back concert fans
Lawsuit filed by families of 9 killed in accident off San Diego coast
Show More
Scarlett Johansson sues Disney over 'Black Widow' release
Deputy shoots suspect at end of chase in Colton
New fair opens at Santa Anita Park, offering games, rides
Police: Gun, victim's wallet found in theater shooting suspect's home
Good Samaritans smash window to save driver having medical emergency
More TOP STORIES News