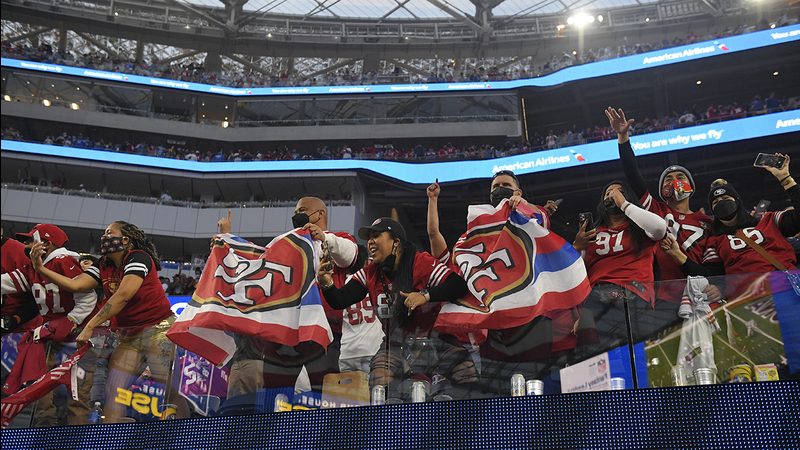 LOS ANGELES (KABC) -- The Los Angeles Rams are hoping there will be fewer San Francisco 49er fans in the stands at SoFi Stadium for the NFC Championship Game next Sunday.

With a trip to the Super Bowl on the line, the Rams are not taking any chances. Ticketmaster limited ticket sales to fans in Southern California by monitoring residency based on credit card billing addresses. But by 11 a.m., the notice had been removed.

Fans who had previously been attempting to buy tickets received a notice that "Public sales to the game at SoFi Stadium in Inglewood, CA will be restricted to residents of the Greater Los Angeles region," and, "Residency will be based on credit card billing address at checkout."

A source from the Rams said the tickets are sold out, so that is why that policy is no longer in effect. Tickets that are available for purchase on Ticketmaster are all through verified re-sales.

"The game is sold out. Our Season Ticket members bought up all available tickets during a presale over the weekend, so there is no policy in place," the Rams public relations team later said in a statement.

Ticketmaster released the following statement: "Ticketmaster works on behalf of our clients, the event organizers. Ultimately these decisions lay with them and we act at their direction."

It was only a few weeks ago these two teams met at SoFi Stadium where a sea of Niners fans made their presence known. Rams coach Sean McVay said the Rams were surprised by the volume of Niners fans at that game.

"It did catch us off guard," McVay said. "There was a lot of red there. That was definitely a surprise."

Rams quarterback Matthew Stafford even had to go to a silent count, which is usually done by a road team to continue calling plays in a loud stadium.

Niners fans are vowing online to snatch tickets from other vendors.