Dodgers take Game 4 over Brewers, even NLCS at 2-2 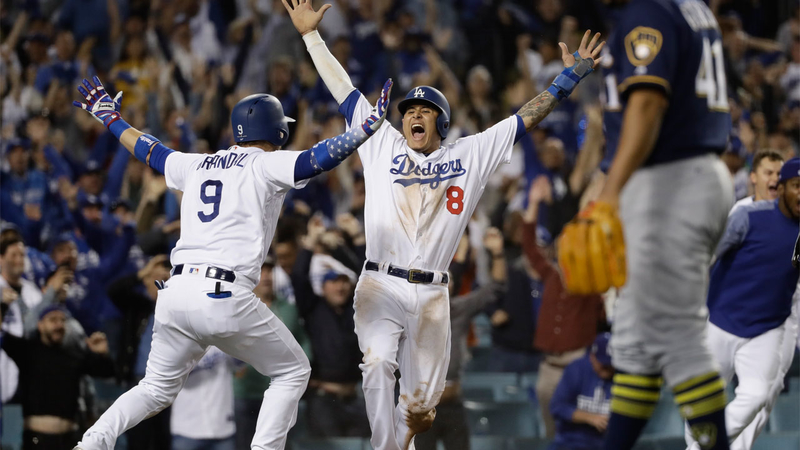 LOS ANGELES (KABC) -- The Dodgers have evened the National League Championship Series at 2-2 after enduring an extra-inning 2-1 win over the Brewers at Dodger Stadium on Tuesday.

The victory deep into extra innings brings them to within two wins of making their second consecutive World Series appearance.

Cody Bellinger grounded a 3-2 pitch from Junior Guerra into right field, scoring Manny Machado, who slid home and touched the plate with his left hand to beat the tag and end a thriller that took 5 hours, 15 minutes.

NOT GOING DOWN WITHOUT A FIGHT. LET’S GO! #LADetermined pic.twitter.com/DhPBgga1oI

The Dodgers struck out 17 times; the Brewers fanned 15 times.

Neither team was able to get much scoring going at Dodger Stadium, taking a 1-1 tie into the ninth and then deep into extra innings.

With the Brewers leading 2-1 in the best-of-seven series, the defending NL champion Dodgers went ahead when Brian Dozier singled home a run in the first inning off Gio Gonzalez.

Milwaukee, seeking its first World Series appearance since 1982, tied the score in the fifth when pinch-hitter Domingo Santana hit an RBI double against Rich Hill.

Both teams wasted plenty of chances. Through nine innings, the Brewers went 0 for 8 with runners in scoring position and the Dodgers 1 for 9.


With one out, Machado had a broken-bat single to left and went to second on Guerra's wild pitch.

Bellinger, who entered as a pinch hitter in the sixth, also had the defensive play of the game. He made a diving catch on his belly of a ball hit by Lorenzo Cain leading off the 10th, spreading his arms out and sliding like a snow angel in right field.

Game 5 of the NLCS is Wednesday, 2:05 p.m. at Dodger Stadium. Clayton Kershaw is expected to start Game 5 for the Dodgers against Brewers ace Wade Miley.

The winner of the seven-game NLCS goes to the World Series to face the victor of the Red Sox-Astros matchup in the American League Championship Series.