The head of the Novato PD SWAT team gunned down his neighbor's dog as its elderly owners looked on, horrified -- and it was all caught on video.

NOVATO, Calif. -- Warning: Some of the pictures in this report are disturbing.

The head of a California SWAT team gunned down his neighbor's dog as its elderly owners looked on, horrified -- and it was all caught on video.

The dog had killed two chickens. But, a police use of force expert said the officer should not have opened fire.

The shooter in this case is no ordinary officer. He is head of the Novato, California Police Department's SWAT team, master at the police gun range, and an expert in deescalation. Some of the pictures in this report are disturbing.

When they moved in two years ago, Phil and Anna Henry hoped Petaluma, California would be a quiet place to retire; he's an architect, she's a university administrator. They wanted a place their grandchildren could visit and play with their shelter dog named Huck. He's a breed called Black Mouth Cur.

Phil Henry: "In the morning, he'd come up and get in our bed. (laughs)"

Anna Henry: "He wasn't allowed at nighttime. No, couldn't sleep. Didn't have a big enough bed."

The trouble began last summer, when their neighbor complained that Huck barked every time he took out the trash.

Phil Henry told ABC San Francisco affiliate KGO, "And he looked over the fence at me and he said, 'Well, if your dog ever comes over here again, he's not coming back.'"

That neighbor is head of the Novato Police Department SWAT team, master of the department's gun range, their expert in deescalation, Sgt. Nick Frey.

Frey did not respond to a request for comment. But, his lawyer provided a surveillance video in which Frey recounts the conversation with Phil Henry about his dog.

That recording comes from Sunday, Sept. 18, the day Huck died. The Henry's three grandkids were visiting.

Anna Henry told us, "And they were playing in the garden and the dog -- they were right by the gate -- the dog accidentally got out through the gate."

Huck headed straight for Sgt. Frey's yard; his two driveways have no fencing or gate. On Frey's security camera, you can hear the Henrys' grandchildren trying to coax Huck home: "Huck, do you want a treat?"

But, the dog has already begun chasing chickens that roam loose in the yard. Anna Henry, 71 years old, dives at Huck but he keeps going, killing one bird, appearing to wound another, as Sgt. Frey emerges from the house with a handgun at the ready. He yells, "Hey, ___!"

Anna Henry is able to leash the dog.

Sgt. Frey yells to her, "Those are my children's birds!"

At the same time, Phil Henry is pulling up with the trunk open on his SUV. Huck would often jump right in. But, there's not enough time.

Anna Henry told us, "I was right there. I immediately apologized profusely and said, 'I'm so sorry, I will replace the chickens,' and I got the dog on the leash but I just had hip replacement surgery and I fell and the dog went back to a flapping chicken that he hadn't killed yet."

The dog takes off toward the wounded chicken pulling Anna to the ground. Sgt. Frey's wife shouts: "Nick, kill him. ___damn it. Kill that ___. (gunshots)"

The Henrys wish Frey had not used lethal force so quickly.

Phil Henry: "You could use a broom, you can use a hose of water. He had a lead on it. And if I had, you know, probably five more minutes, I could have had him on the lead."

KGO: "Why didn't he just grab the leash?"

Alison Berry Wilkinson: "I think you're asking for a superhuman effort there. The dog viciously and ferociously lunged at him in a split second towards him."

Berry Wilkinson tells KGO Frey gave his neighbors the chance "to try and capture as well as control the dog." The attorney has worked with police practices expert Jeff Martin, who analyzed the video and claims it shows the dog charging Sgt. Frey.

Martin said, "If the dog is now moving toward you, is charging after you after it's broken free from its owner and after the dog is shot, falls pretty much at your feet, what's the logical inference to draw from that?"

But, the Henry family lawyer disputes that, pointing to the same video. Anna Henry has Huck on the leash heading back home; he turns and takes off in this direction after another chicken. Sgt. Frey moves to the right out of the way, takes his shooting stance, fires three shots.

You can see where the dog goes down on the video. Frey then takes seven steps ending to the right of Huck. The Henry's attorney says that shows the dog was a significant distance from the sergeant and did not fall at Frey's feet when shot.

Madeline Liebreich told KGO, "So, it's pretty comical that he's now deciding to argue that he was acting in self-defense because that's a little hard to do when the dog's running away from you."

With Huck bleeding on the ground and unable to move, Anna Henry and Frey's wife ask the sergeant to put the dog out of its misery.

Anna Henry remembers, "Jenny, his wife said, 'Nick, you have to help him,' and I said, 'Please, Nick,' because I wanted the dog euthanized. And he said, 'I'm not touching that dog.'"

Frey's lawyer responds, "The dog was no longer a threat. He's not justified in just shooting a dog for the sake of shooting a dog."

Berry Wilkinson says he could not legally euthanize the dog, and that, in any event, Frey thought the dog had died shortly after the shooting.

The Henrys believed Huck was near death, so they waited with him in the rain. An hour later, he was still alive, so they loaded him into the SUV with their daughter.

Rhianna Henry told KGO, "And I climb in the back with him because I didn't want him to die alone, like in the back of the car."

She texted a picture to a friend who asked what was happening; Rhianna Henry didn't know she had Huck's blood on her face. He later had to be euthanized.

KGO tracked down the veterinarian who treated Huck that day, and she told him the bullets hit the dog from behind, in her opinion.

Dr. Heather Burns said, "There was one in the right back of his right shoulder, one right in the back of the top of the head."

Dr. Burns shared Huck's x-rays with us showing the shrapnel.

KGO: "If a dog is lunging at you and you're firing at the dog, wounds are going to be- (motioning to the front)."

Based at least in part on Sgt. Frey's statement that "he felt threatened by the dog and did what he felt necessary to protect himself," Sonoma County Animal Control closed the case, adding that state agricultural code allows a dog to be killed if it's chasing livestock or poultry.

But, a nationally-recognized police use of force expert who has testified in more than 1,300 cases has a different opinion.

Roger Clark told KGO, "And I'm speaking at the level of a trained police officer, can't shoot to protect chickens, end of story."

Clark is surprised that the Sonoma County Sheriff's Department and Novato Police Department where Frey works did not do their own investigations, relying instead on the Animal Control report. He questions why Frey would open fire toward an active roadway - a truck passes by, just seconds after the last gunshot. "He's in a front yard. I don't know how the barrel was pointed, but if it was anywhere in the general vicinity of that car, it could ricochet and hit somebody in the car."

Finally, there's the issue of this skeleton the Frey family put up one week later, near the spot where Huck died. The Henrys said it added to the pain and loss they already felt. Frey's attorney said it was just a Halloween decoration they had used before.

Berry Wilkinson said, "It was the same decoration they did last year. Was it thoughtless and unthinking? Yes. But it was, was it intended to cause them emotional distress and harm? Absolutely not."

Phil Henry told KGO, "I'd like for him to feel some pain. I mean, I'll never forget that day ever (cries). And I'd like him to be accountable. Somehow, I would like accountability."

While the dog was friendly to the Henry family and their grandchildren, we spoke to one neighbor who was afraid of Huck because the dog would bark when he walked by. The Henrys told KGO they aren't sure about filing a lawsuit, but if they did go that route, they want nothing for themselves. They say they would donate any proceeds to charity.

Dog recovering after being found stuck to sidewalk 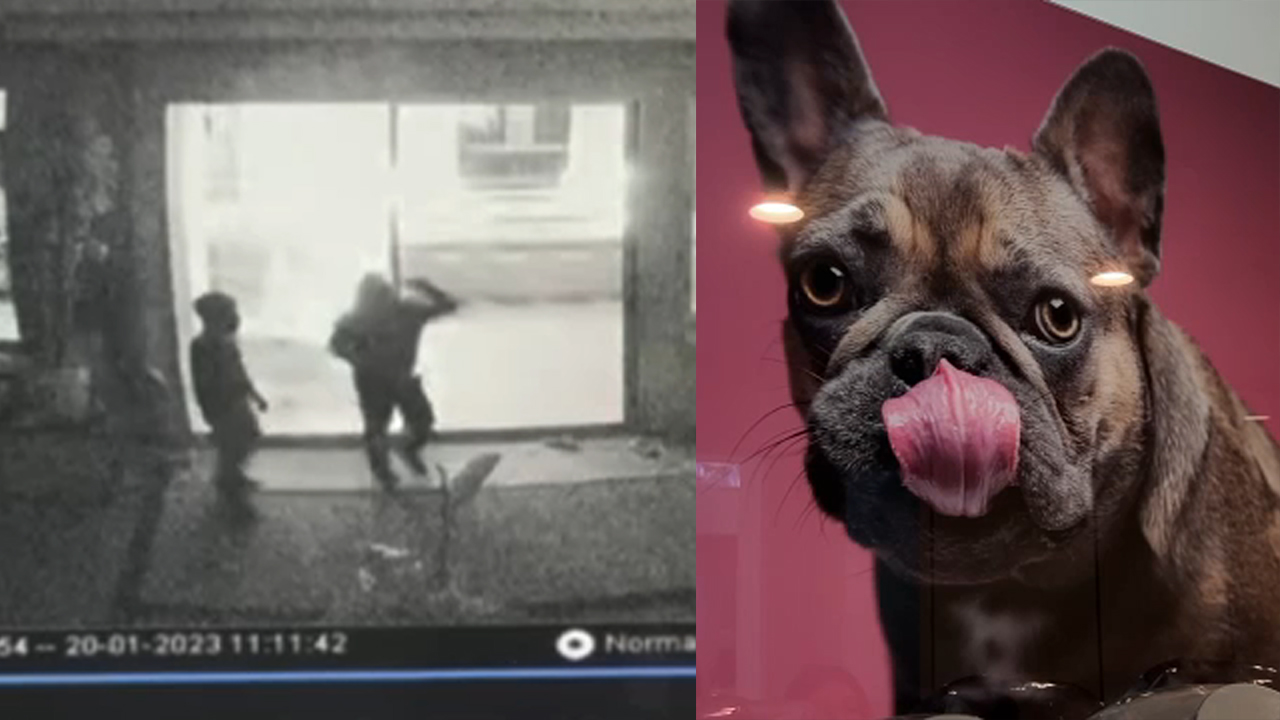