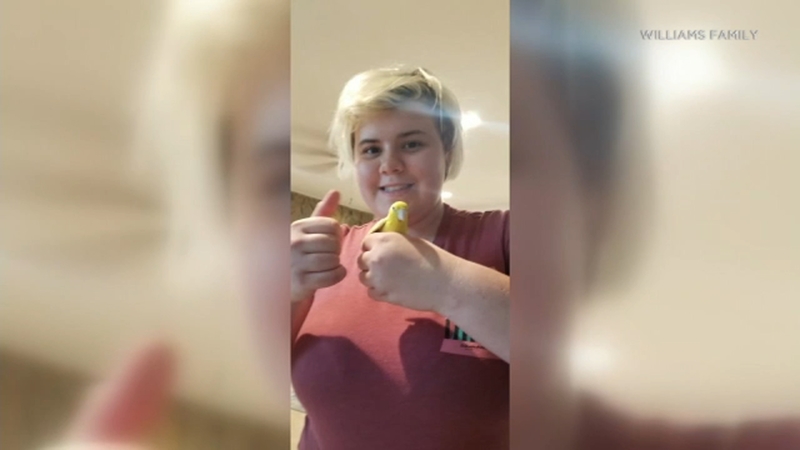 ANAHEIM, Calif. (KABC) -- The family of a 17-year-old girl shot and killed by a Fullerton police officer is demanding answers.

Hannah Williams was shot after getting into a crash with a police car on the 91 Freeway in Anaheim, and now her family is calling on the department to release the video from the officer's body camera.

"Most of the information this family and my office has learned about this case, we learned from the media. That's not how you respect a family," Merritt said.

Family members have released the photo of a 17-year-old girl killed in an officer-involved shooting on the 91 Freeway in Anaheim.

Merritt said Hannah was happy, surrounded by family when she took their rental car without a permit or license Friday night.

The Orange County District Attorney's Office is investigating the case and said her car and the officer's car made contact on the 91.

Merritt asserts her inexperience -- and potentially an earthquake -- contributed to the accident. He questions the credibility of witness accounts of what happened next.

"She brought her arms up, with a gun. Now, I don't know why," said witness Renay Arnold.

Merritt said it could've been her cellphone.

The D.A. released a photo of a replica gun found at the scene. Merritt said he doesn't believe it had anything do with her being shot.

"The bodycam footage exists so that citizens, so that families, won't have to guess about what happens in a use-of-force incident," Merritt said.

Before the news conference, Fullerton police announced the footage would be released soon and said: "There is a balance that must be struck between the release of information and the need to keep the public informed. This is a balance that we respect, and must maintain, in order to complete thorough, thoughtful, and diligent investigations."

"She deserved everything in this world, and all the stars in the sky. She was one-of-a-kind," the victim's sister said.

The family plans to have an independent autopsy performed, Merritt said. He expects the results to be released soon.

The mayor of Fullerton released a statement late Thursday. The statement read:

As Mayor of Fullerton, I share the public's concern about the Officer involved shooting from Friday, July 5th. I understand the need for information and want to assure you that I have been in constant communication with Fullerton Police Chief Dunn about our internal investigation as well as the investigations by the Anaheim Police Department and the Orange County District Attorney's Office. For full public transparency and accountability, these investigations will be comprehensive, but they do take time to make sure all the facts are known.
I am also working with Chief Dunn to make sure that the release of video evidence, per Assembly Bill 748, is met, and in this case, exceeded, as the Fullerton Police Department will release relevant video evidence in the next few days.
Incidents like this are tragic for all involved. As a father, I empathize greatly with the sorrow and pain that the William's family is experiencing. I want everyone to know that releasing this information is very important to us, and to our continued commitment to accountability and transparency to the community we serve.
Report a correction or typo
Related topics:
anaheimorange countyofficer involved shootingshootingfreewaytraffic
Copyright © 2021 KABC-TV. All Rights Reserved.
TOP STORIES
Police find items belonging to Brian Laundrie, apparent human remains
FDA OKs mixing COVID vaccines; backs Moderna, J&J boosters
Shooting victim drives several blocks, dies after crash in South LA
Port of Oakland offers to help ease SoCal backlog
14-year-old boy killed in Apple Valley hit-and-run; suspect sought
LA City Council votes to suspend Mark Ridley-Thomas from office
Walkout at Netflix over Dave Chappelle special brings out dozens
Show More
Video: Volcano in southern Japan erupts with massive smoke column
Facebook planning to change its name, report says
Elderly Chinatown tenants demand elevators fixed
Americans arrested for trying to board flight in Switzerland
Man shot during robbery attempt in Beverly Hills
More TOP STORIES News