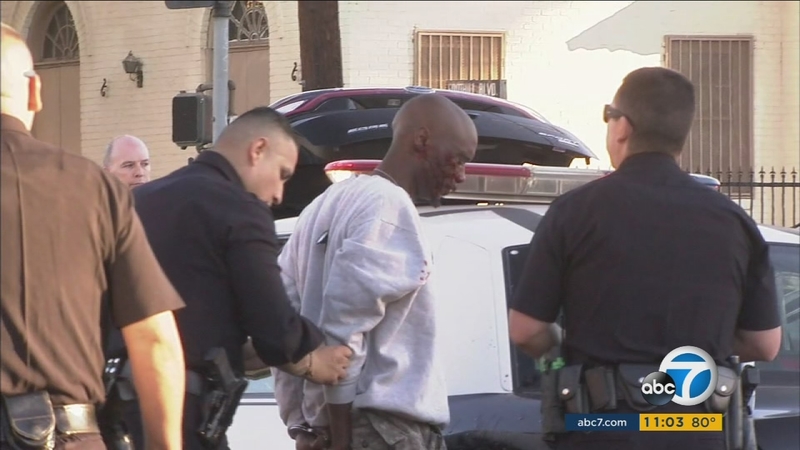 2 in custody after openly carrying rifles in Inglewood, police say

INGLEWOOD, Calif. (KABC) -- Two men were taken into custody in Lake View Terrace on Tuesday morning, police said, hours after the suspects openly carried rifles while walking around Inglewood in what the pair described as a "peaceful protest."

Inglewood police initially located the men sometime before 11 p.m. Monday, after conducting a search in the area of 104th Street and Crenshaw Boulevard and instructing the public to avoid the area. News video showed multiple officers and at least one armored vehicle at the scene.

Police monitored the two men, one of whom identified himself as "Tay S.," by helicopter and on the ground.

"Let it be known that this is a peaceful protest and I'm within my constitutional rights. So if they violate that, that just goes to show how phony they are," Tay S. said, wearing military fatigues and a helmet. "That's why they want to take the guns away -- because once they do that, they can come in, rape your wife, rape your kids, because they got guns but you don't."

A videographer for ANG News, who gave his name only as Jake, described the scene in Inglewood.

"One person was carrying a sign that said 'black lives matter' and they were indicating that they wanted to kill police officers and that they were ready to die," Jake said.

Around 3 a.m., the Los Angeles Police Department began tracking the pair after they left Inglewood and headed northbound on the 405 Freeway into the San Fernando Valley.

The men drove to an apartment building near Stagg Street and Ventura Canyon Avenue in Panorama City.

According to the LAPD, the pair later left the building in a dark-colored SUV and were followed by officers to Lake View Terrace.

The suspects' vehicle came to a stop at the intersection of Foothill Boulevard and Terra Bella Street, but the occupants "failed to comply with the officers' commands, at which time we had a use of force and they were taken into custody," said LAPD Deputy Chief Bob Green.

A suspect was struck by a rubber bullet that was fired by police, authorities said. The face of one of the men was visibly bloody as he was placed in handcuffs.

Investigators were trying to determine "if these were legal assault weapons," Green said, "and what the intentions of the individuals were."