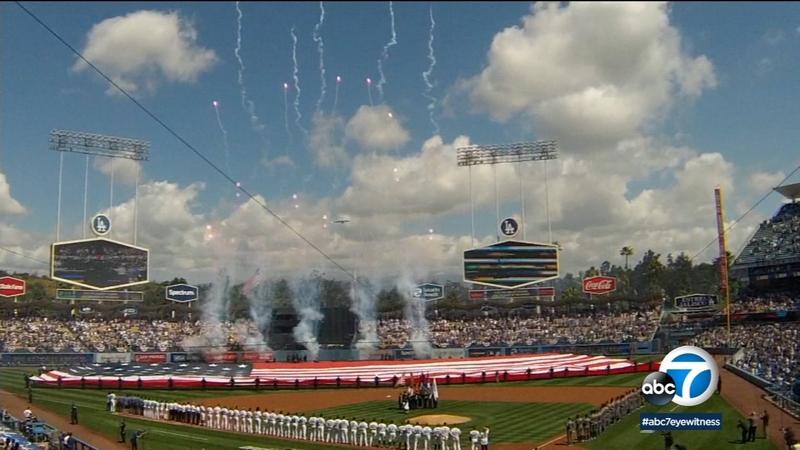 ELYSIAN PARK, LOS ANGELES (KABC) -- Thousands of fans partied at Dodger Stadium as the team started the 2019 season in a big way - with an Opening Day-record eight home runs.

The game marked the launch of LA's quest for a third consecutive National League pennant.

Hyun-Jin Ryu started on the mound, marking the end of an eight-season streak with Clayton Kershaw starting on Opening Day.

Ryu pitched six innings, giving up just one run before being relieved by Yimi Garcia.

Dodgers fans at the Citadel Outlets suited up in blue and formed a human Los Angeles Dodgers logo to celebrate Opening Day on Thursday.

Max Muncy, Cody Bellinger and Hernandez then homered in the seventh for the power-packed Dodgers.

But Opening Day was more than just a game for the thousands of Dodger fans at the game.

It was a celebration.

And for superfan Tony Litoff, it was his 47th celebration with the team. Litoff has gone to every Opening Day since the early 1970s.

The dedication has the occasional sacrifice. A friend had good tickets for the NCAA Final Four, but he had to say no.

"That's a big number," Roberts said. "A lot of things in life get in the way. To be able to make 47 opening days, that's pretty remarkable."

This will work. We promise.

"We're having fun and that's what it's all about, you know, having a good time, coming back and hoping we can do it this year," said fan Elsa Villa. "The whole festivities of everything."

"I can't wait," he said. "I just got out of the hospital. I couldn't wait to get my Dodger tickets. I plan on being here every game."

The Dodgers are set to open their 2019 season Thursday by hosting the Diamondbacks at Dodger Stadium, kicking off L.A.'s quest for a third consecutive National League pennant.