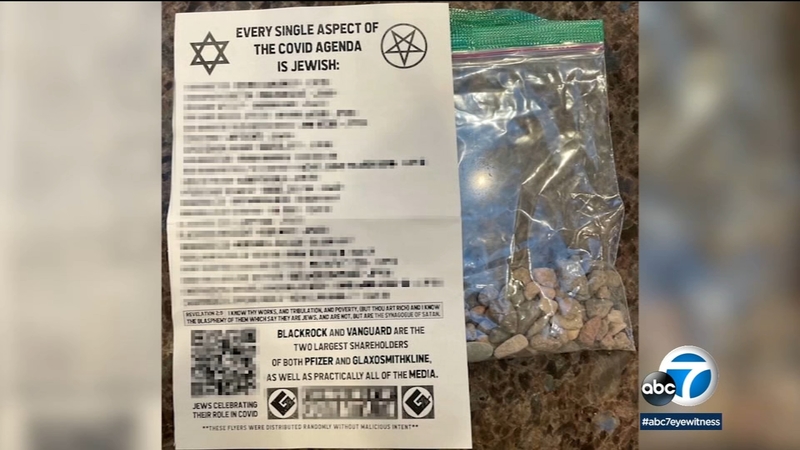 "We have been in communication with area residents & are actively investigating the situation & source," read the tweet.

We have been made aware of anti-semitic flyers distributed to a neighborhood in southeast Huntington Beach. We have been in communication with area residents & are actively investigating the situation & source. pic.twitter.com/fokJ2k6G8i

Shortly after, police in Newport Beach tweeted a similar message saying they also received reports of antisemitic flyers in a neighborhood on the eastside.

"Our department is currently working with residents and actively investigating the incident," read the tweet.

The Newport Beach Police Department is aware of the anti-semitic flyers that have been distributed in an eastern Newport Beach neighborhood. Our department is currently working with residents and actively investigating the incident. pic.twitter.com/3rV5KK8jZF

The flyers claim influential people in the Biden administration are Jewish and say, "every single aspect of the COVID agenda is Jewish."

"It lists a whole bunch of Jewish sounding names, but many of the people aren't Jewish, and Judaism had nothing to do with this," said Rabbi David Lipper, from Temple Beth Sholom. "It's a total farce."

The flyers were found inside a plastic bag with rocks, and have been mostly found in Orange County. Other similar incidents have been found across the U.S.

Antisemitism is the world's oldest hatred, dating back thousands of years, yet many don't know how it functions or what it means.

One Temple member in Tustin says she didn't receive a flyer, but is saddened to see what's happening in her community.

"It does not feel good. I'm not going to say that I'm afraid to walk outside, but I do see a rise in antisemitism," said Marci Endless Bruffey. "It is frightening for all of us."

Lipper says these hate incidents have been happening for at least a year, and says a group operating out of Sonoma has been creating the flyer.

It doesn't appear that only Jewish homes were targeted. A man who didn't want to be identified, told Eyewitness News that he received a flyer and is not Jewish.

Lipper says the lead organization in reporting hate incidents like this one is the Anti-Defamation League, as they work hand in hand with law enforcement.

"Antisemitism has been on the rise for the past five or six years, and Jewish folks are feeling it all over," said Lipper. "It's very disturbing. This is not the America that we hoped to live in."