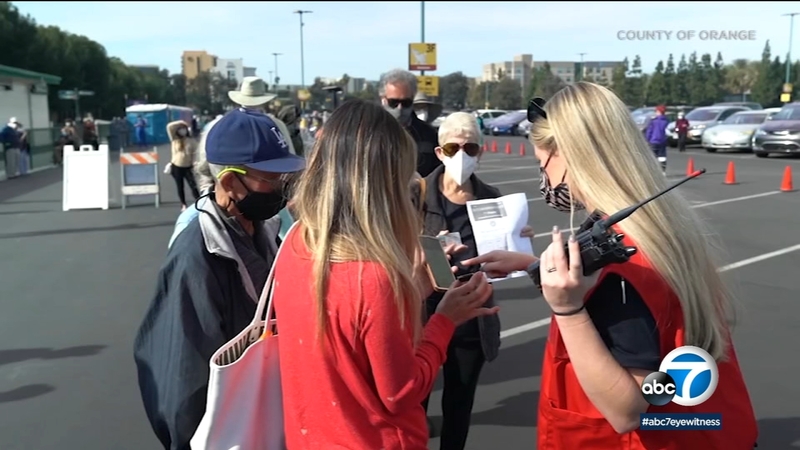 The county contracted CuraPatient to develop the app, which will also be used to track side effects which may come from the inoculations.

After O.C. opened eligibility to residents 65 and older Tuesday, the system was overwhelmed with people trying to get appointments to the point where people could no longer register. Messages, calls and emails have come into Eyewitness News with complaints.

According to the O.C. Health Care Agency, 10,000 people were able to get appointments overnight Tuesday. Some of those are Marvel Bartley's friends.

Disneyland, which remains closed to visitors, is set to host the first of five massive vaccination sites in Orange County.

"They have been really successful. They've gone to Disneyland and found it to be maybe an hour, which isn't bad at all, so I don't think it's a total disaster, but I think it's challenging," Bartley said.

Bartley was eligible for the vaccination as part of the 65 and over group, but as of Friday afternoon, she had only been able to register on Othena. Bartley said she'd keep trying to book an appointment. She said patience and persistence were key.

"I think that's what it takes," Bartley said.

Bartley and others who were able to register shared the messages they received which stated they weren't eligible for appointments (though they were all over the age of 65), that slots weren't available, or confirming appointments, but without a date, time and location.

Joseph McFaul said he moved too slow when he had a chance and had the option of accepting a time.

The director of the Orange County Health Care Agency announced Tuesday that people age 65 and older are eligible to be vaccinated for COVID-19.

"I quickly went down to 'accept' that appointment and soon as I clicked on it, it said no appointments available," McFaul said.

Adding to the frustration, many in the 65 and over age group may not be comfortable with technology or have access to it.

According to U.S. Census estimates, 14% of O.C.'s 3.2 million residents are in this age group.

According to data estimates from census tracts, within O.C. District 5, about 110,000, or 17.5% of about 620,000 people are 65 or older. District 5 Supervisor Lisa Bartlett said this technology was still the most efficient route.

"When you consider vaccinating the population of 65 and above in our county, showing the aging demographics that is an enormous population and we want to vaccinate that population in the most efficient way possible and by putting everyone through the Othena vaccination process to schedule appointments that is really the most efficient way to get everyone registered, get all the information collected in one data repository and be able to schedule appointments," Bartlett said.

Bartlett asked residents to keep trying because new appointments opened daily and said soon, a live chat would be available for assistance.

McFaul appreciated the challenge of the task at hand, but said the bugs should have been worked out before going live.

"By having a typical person try to use it and see what obstacles they run into and I think if they'd just done those things they would've had a better system right away," McFaul said.

The OCHCA director asked Orange County's supervisors Tuesday to find communities within their districts with large numbers of seniors who may not have access to the Disneyland Super POD. The agency will send mobile PODs to these areas on Sundays to vaccinate people, rotating locations weekly.