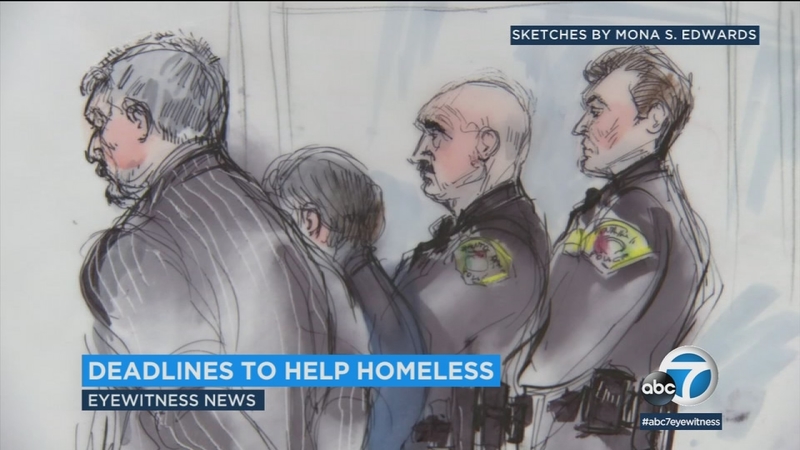 SANTA ANA, Calif. (KABC) -- A judge on Friday handed down a clear message for action on the homeless crisis in Orange County.

In the latest hearing about people displaced from the Santa Ana river trail, U.S. District Judge David Carter told leaders and law enforcement from Santa Ana and Anaheim that he doesn't want the homeless just bounced back and forth between the cities.

The judge set a new deadline for the cities to find a place to house the homeless. He wants specific sites for emergency intake, transitional and long-term supportive housing. He wants answers on June 13 and plans by July 16, when armories will likely close.

RELATED: homeless being moved out of Anaheim motel

"When those armories are closed, you have to have a site. He spelled it, 'S-I-T-E,' numerous times to make it unequivocally clear," explained Orange County Supervisor Todd Spitzer.

The judge also said the impact from clearing the river trail has been pushed too far onto Santa Ana and Anaheim, a sentiment Santa Ana resident Tim Johnson agrees with.

"We measure this problem in days and weeks, whereas other communities across the county have the luxury of measuring this crisis and issue in years and decades," Johnson said.

The new deadlines come as 30 people were moved out of the Baymont hotel in Anaheim, where the county's been providing mental health treatment. Most have been enrolled in new programs.

With the new pressure, Orange County Supervisor Andrew Do said the county's already eyeing some potential sites for the homeless.

"Within the next couple of months we believe cities will be able to come back to the court to provide sites and work with the county on a collective solution," Do said.