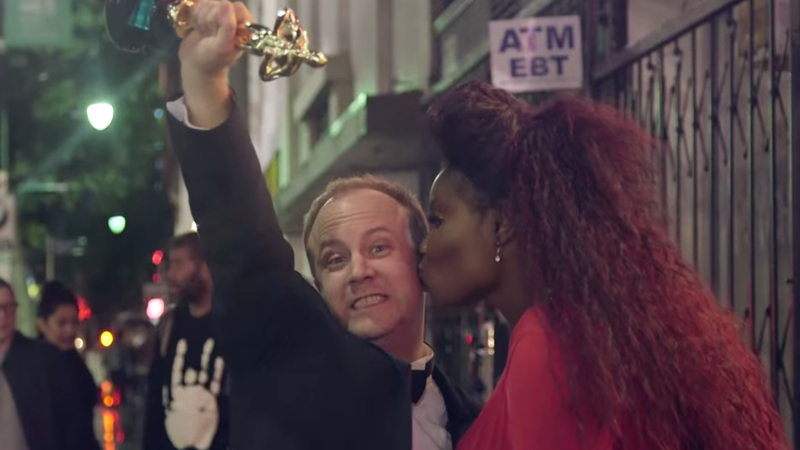 LOS ANGELES (KABC) -- Oscar Sunday is all about posing, but sometimes the posers really are just posers.

In the video from NMR, improv actor Mark David Christenson crashed Hollywood's biggest night -- sneaking into various Oscar parties, getting free meals and even posing with adoring fans -- all with a fake Oscar statue.

"It has hair, which the Oscar doesn't. He has a very smooth, bald head. He doesn't hold a wreath. And the real Oscar does not have his elbows out," Christenson says of his imposter Oscar.

That could explain why he never made it inside the actual Oscars show.

"We made it through about two checkpoints and then as we attempted to come up to the actual Dolby, we were shooed away," Christenson said.

Cheesy Oscar statues were not a replacement for actual credentials at the ceremony, but it was enough for pretty much everyone else Christenson and his camera crew ran into!

"Just flat out saying, 'I don't have my ID on. And them saying, 'Well, you have that. That's your ID.'" Christenson said.

His shiny gold friend was even enough to convince a valet to turn over someone else's BMW, much to Christenson's horror.

"I was terrified. It even shows in the video where I'm whispering to my crew, 'What am I going to do?'" Christenson said.

The answer? Steal the car! Christenson says he drove it for a block before returning the car.

Los Angeles police said Christenson is probably off the hook since no complaint has been filed.


Tap to watch the entire prank in the YouTube video above.