A mural at a Pacoima elementary school pays tribute to community and activist Hillery T. Broadous 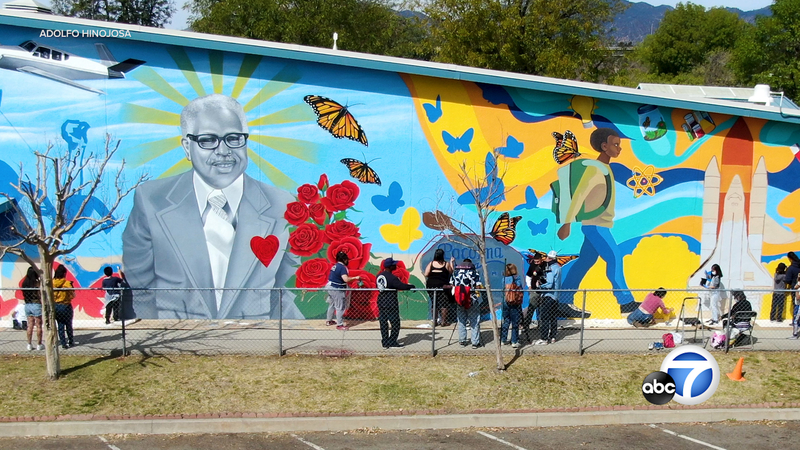 Largest mural in LAUSD unveiled at a Pacoima elementary school

PACOIMA, LOS ANGELES (KABC) -- Community members and leaders cheered as a brand new mural at Hillery T. Broadous elementary school in Pacoima was unveiled at the end of March.

Standing 27 feet tall and 145 feet wide, this is the largest mural in the Los Angeles Unified School District.

"I am just so pleased that this will be a legacy here for years," said Principal Victoria Littlejohn.

Artists and those who helped make this mural happen say it's a tribute to the city of Pacoima and community leader Hillery T Broadous, who passed away in 1982.

"He was a man that dedicated his life and service to the Lord. That's what he was about. If you look at it, and you see that smile ... it speaks to what's possible when we open our hearts and our minds," said the daughter of Hillery T. Broadous, Pam Broadous.

With the help of artists and community members, the mural took nearly five weeks to complete.

"I thought it was a crazy idea because I looked at the wall and I told myself, this is going to be a lot of work. But you know, we took a crazy idea and we brought it to life. And I was so excited just to be able to be part of this project," said mural artist Juan Reyes.

Staff members and mural artists hope the mural inspires community members in the neighborhood and beyond.

"The mural itself is a beacon of hope for the future, not only for our community, but for LA as a whole. One where our culture and our history doesn't divide us, but it unites us," said Executive Director of Awoke Foundation Pierre Arreola.

"My wish is that not only will the Broadous family continue to talk about it, but that our students as they graduate and make their way into life, they will come back and talk about their story," said Littlejohn.