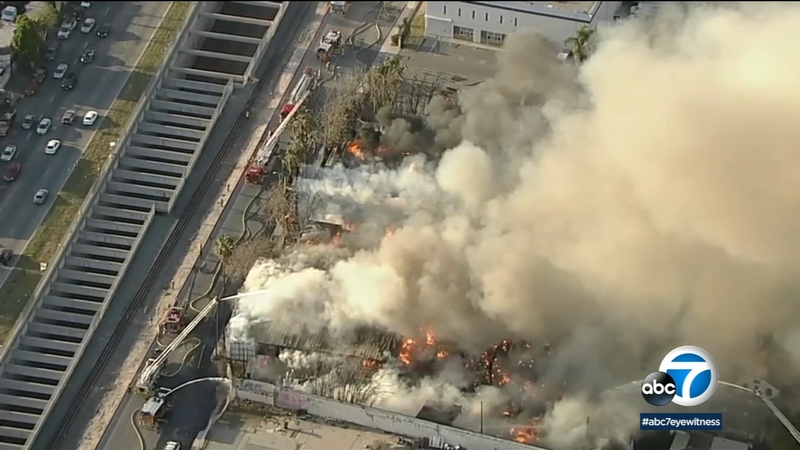 The blaze erupted near Rosecrans Avenue and Alameda Street shortly before 5 p.m. and sent plumes of smoke billowing over the neighborhood.

Firefighters poured thousands of gallons of water on the flames that devoured a mixed-use commercial structure. The flames raged through the large property and spread like a wildfire as embers ignited homes and other structures in the surrounding neighborhood.

Fortunately, no injuries were reported in the incident.

Crews were concerned about possibly dangerous materials burning at the site.

"We had everything in there from vehicles to cardboard to pallets, we've got paints... you name it," said Jonathan Matheny with the L.A. County Fire Department.

Neighbor Sandra Navarro said her teenage daughter ran to safety alongside her grandmother and dog.

Nearby structures and trees were on fire as firefighters went into a defensive position to tackle the blaze and prevent flames from spreading.

The L.A. County Sheriff's Department announced several road closures in the area, and asked the public to avoid the area.

Crews from the Compton, Long Beach and L.A. County fire departments responded to the 5-alarm blaze. They were at the scene late into the night, hours after the fire erupted.