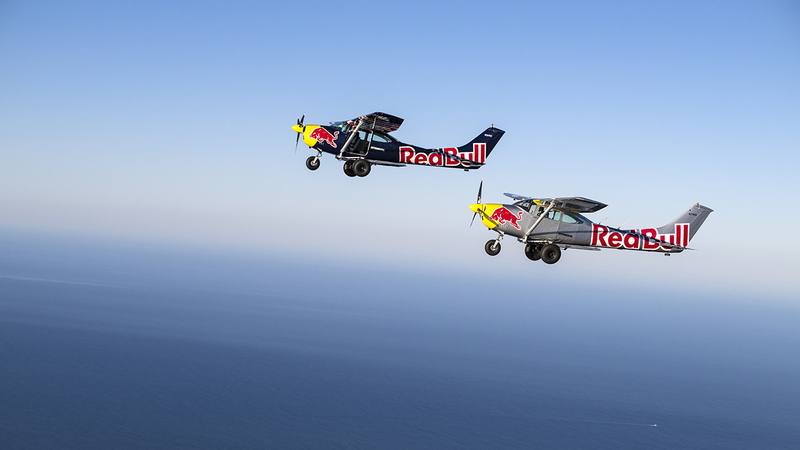 Pilots to attempt to skydive into freefalling unmanned planes

This weekend, the world will witness a never-before-attempted aerial performance involving two pilots, two planes -- and no one at the controls.

Red Bull Air Force members Luke Aikins and Andy Farrington will make history with a world's first spectacle, Plane Swap, as each will solo pilot an aircraft, put them into a vertical nosedive, jump out (leaving them empty) and skydive into each other's planes.

The event will stream live for three hours exclusively on Hulu in the U.S. beginning at 7 p.m. ET/4 p.m. PT on Sunday, April 24.

Cousins and skydiving pros Aikins and Farrington will tackle the feat in two Cessna 182 single-seat aircrafts, which they will fly to an elevation of 14,000 feet over Arizona. Once the planes are pitched in a synchronized nosedive, the pilots will stop the engines and exit their aircraft as they plunge at a speed of 140 mph toward the ground. The duo will then skydive toward each other's planes, enter the cockpits, disengage the braking system, restart the engines and retake control.

The teammates are not strangers to death-defying stunts: Aikins, who conceptualized the "Plane Swap," performed a historic first-ever skydive without a parachute on live TV in 2016, and Farrington boasts more than 27,000 skydivers himself.

"Plane Swap is the natural progression and culmination of my life's work as a professional, both in the air as a pilot and skydiver and on the ground as an innovator," Aikins said. "It's the pinnacle of my career and my goal is to inspire the world and show that anything is possible. You can set your mind on something that at times seems wild, crazy and unattainable, but through ambition and creativity, you can make it happen."

Hours of research and development will make this incredible feat possible. Aikins and Farrington partnered with Dr. Paulo Iscold, a world-renowned aeronautical engineer, to develop a special airbrake system and other modifications to keep the planes at a controlled vertical descent that closely matches the skydiver's freefalling speeds.

And despite hours of practice, uncontrollable factors remain, like Sunday's wind speeds and the density of the natural environment.

"We took a lot of aeronautical 'NOs,' and here we are, ready to attempt the unimaginable after rigorous preparation," Aikins said. "When we attempt this, it's going to be one of those cool moments for me knowing that we jumped through every hurdle."

"Plane Swap" is the latest in a series of live news and sports coverage, events and programming that has been made available for Hulu on-demand subscribers, including Lollapalooza 2021, 75 exclusive NHL games and Dick Clark's New Year's Rockin' Eve with Ryan Seacrest.

Pilot Luke Aikens sits down with ABC 13's Jonathan Bruce ahead of historic attempt where two pilots will change plans at 14,000 ft.