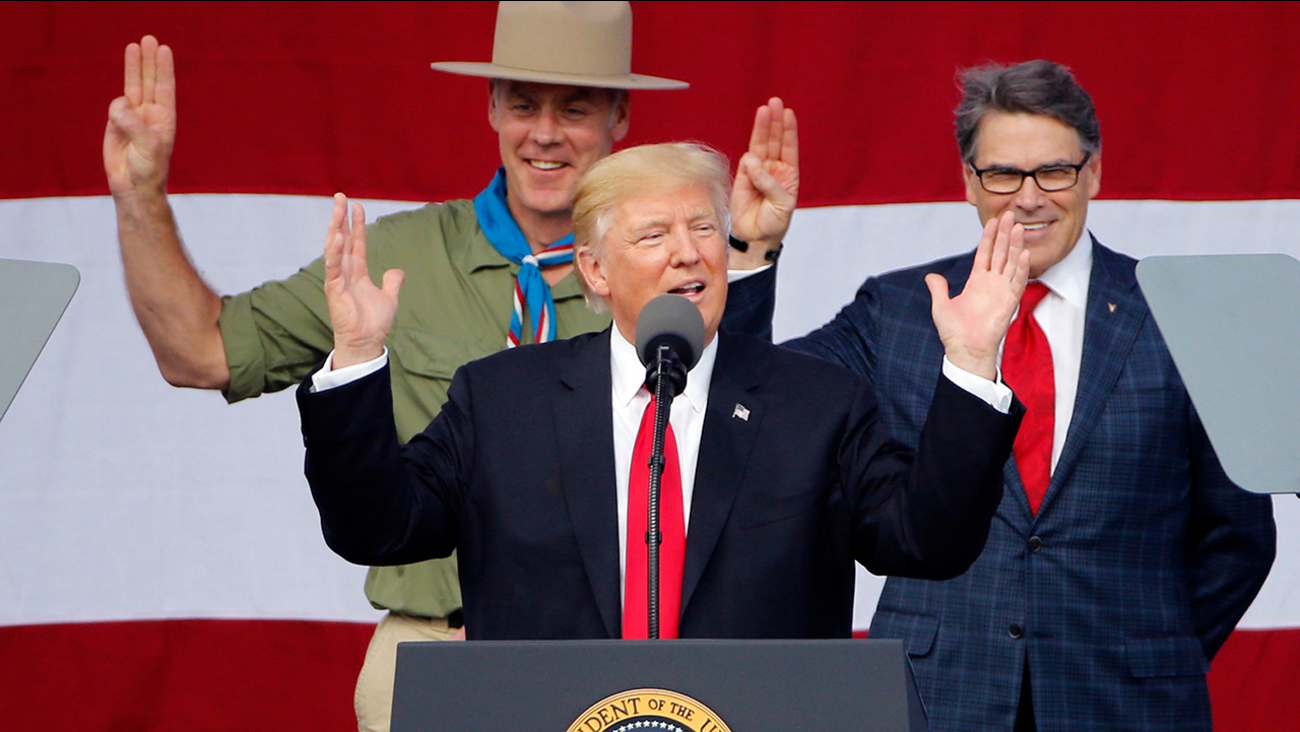 NEW YORK -- The Boy Scouts' chief executive apologized Thursday to members of the scouting community who were offended by the aggressive political rhetoric in President Donald Trump's recent speech to the Scouts' national jamboree.

The apology came in a statement from Chief Scout Executive Michael Surbaugh, three days after Trump's speech to nearly 40,000 scouts and adults gathered in West Virginia.

Other U.S. presidents have delivered nonpolitical speeches at past jamborees. To the dismay of many parents and former scouts, Trump, a Republican, promoted his political agenda and derided his rivals, inducing some of the scouts in attendance to boo at the mention of Barack Obama, his Democratic predecessor.

"I want to extend my sincere apologies to those in our Scouting family who were offended by the political rhetoric that was inserted into the jamboree," Surbaugh said. "That was never our intent... We sincerely regret that politics were inserted into the Scouting program."

Surbaugh noted that every sitting president since 1937 has been invited to visit the jamboree.

"It is in no way an endorsement of any person, party or policies," he said. "For years, people have called upon us to take a position on political issues, and we have steadfastly remained non-partisan and refused to comment on political matters."

Surbaugh contended that the Trump controversy has not diminished the success of the 10-day jamboree, yet he acknowledged its impact.

"Scouts have continued to trade patches, climb rock walls, and share stories about the day's adventures," he said. "But for our Scouting family at home not able to see these real moments of Scouting, we know the past few days have been overshadowed by the remarks offered by the President of the United States."

Surbaugh's statement echoed some of the sentiments expressed by the Boy Scouts' president, Randall Stephenson, in a phone interview with The Associated Press on Wednesday.

Stephenson said Boy Scout leaders anticipated Trump would spark controversy with a politically tinged speech, yet felt obliged to invite him out of respect for his office.

Hoping to minimize friction, the Boy Scouts issued guidelines to adult staff members for how the audience should react to the speech. Any type of political chanting was specifically discouraged.

Stephenson, who was not in attendance at Trump's speech, said the guidance wasn't followed impeccably.

"There were some areas where perhaps they were not in compliance with what we instructed," he said. "There's probably criticism that could be leveled."

Stephenson was asked whether the Scouts would invite Trump back to address the next national jamboree if he wins re-election.

"I don't see why we would break with tradition, whoever is holding office," Stephenson said. "We are not to going to censor or edit the president of the United States. That's beyond our pay grade, regardless of who it is."
Report a correction or typo
Related topics:
politicsdonald trumpboy scouts of americapoliticsboy scoutspresident donald trump
Copyright © 2021 by The Associated Press. All Rights Reserved.
TOP STORIES
Kaiser Permanente mandating COVID-19 vaccine for employees, physicians
South LA blast contributed to 2 deaths, families say
Homeless told to leave Irwindale encampments
California unemployment crisis: Calamity at the EDD
Former employee sues Porto's alleging pregnancy discrimination
Firefighters battling brush fire in Corona
California seeing uptick in first-dose vaccinations
Show More
Disneyland to reveal new 'Magic Key' program in place of annual passes
Father of 5 who was waiting out COVID vaccine dies from the virus
Some areas of South Tahoe closed due to animals with plague
Pedestrian killed in Santa Monica hit-and-run crash
Bay Area health officers issue new indoor mask mandate
More TOP STORIES News