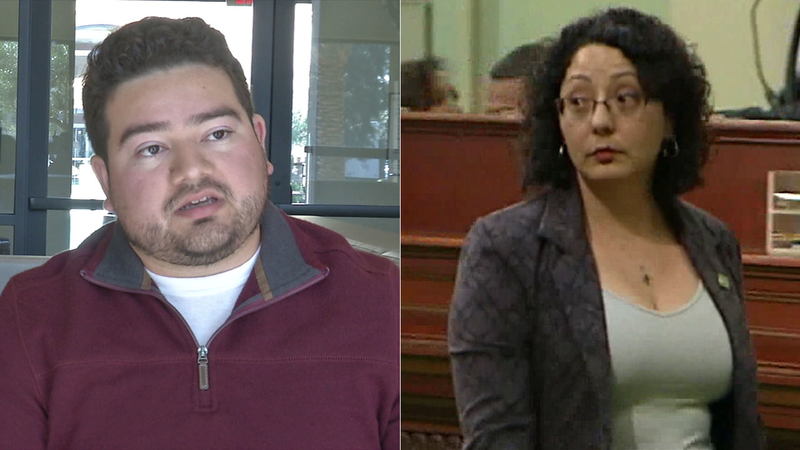 A former legislative staffer is recalling an incident in which he says an assemblywoman who is at the forefront of the "Me too" movement groped him at a softball game in 2014.

Daniel Fierro, 29, says he was in the dugout following a legislative softball game when an inebriated Assemblywoman Cristina Garcia groped him.

He recalled she was slurring her words when she walked up to him.

"She put her hand on my forearm," Fierro told Eyewitness News. "I thought at the time it was just to stabilize, her, to help her stand still. The next few seconds she moved her hand to my upper back and started lightly stroking it. Then she dropped her hand to my butt and squeezed."

He says he walked away.

"As I walked past her, she grabbed for my crotch."

A second person has also made allegations against Garcia. An anonymous male lobbyist told Politico that Garcia, who appeared to have been drinking heavily, made crude sexual remarks and tried to grab his crotch at a political fundraiser in 2017.

Garcia, D-Bell Gardens, was one of dozens of women who signed an open letter against the pervasive culture of sexual harassment in Sacramento, saying she was also a target. When Time magazine named "silence breakers" its persons of the year, Garcia's picture was included.

She called it a humbling experience.

Last year in an interview with The Associated Press on the subject of alcohol-fueled fundraisers and other after-work events in Sacramento, Garcia said alcohol was not an acceptable excuse for sexually inappropriate behavior. She said the problems were created by the men who misbehave, not the events themselves.

"I would say that most of the public realizes that our job is based on relationships, and so we are expected to go out there and socialize," she said at that time. "I think our public also expects us to hold ourselves to a higher standard."

Fierro said seeing her words and actions on the harassment issue bothered him in light of his own encounter with the assemblywoman.

"Reading what she said about another member's conduct, I remember thinking what she's describing as inappropriate is describing exactly what happened to me and that really bothered me," Fierro said.

Fierro says he told his wife about the alleged incident in December and later shared it with his former boss, now Assembly majority leader Ian Calderon.

The Assembly Rules committee is investigating.

Fierro, who lives in Garcia's legislative district, was working for a different lawmaker in Sacramento at that time.

He now runs a communications firm and says he wants to keep lawmakers accountable and help other men and women speak up about their experiences.

"In this case it's different because I am a man who's saying something about it but that doesn't take away at all from experiences that every single woman has had."

Garcia has taken a leave of absence.

She released a statement saying in part "upon reflection of the details alleged, I am certain I did not engage in the behavior I am accused of. However, as I've said before, any claims about sexual harassment must be taken seriously. I implore the Assembly Rules Committee to conduct a thorough and expeditious investigation, and I look forward to getting back to work on behalf of my constituents and for the betterment of California."

Calderon said Fierro told him of the incident this year and that's when Calderon reported it to the Rules Committee. He noted it's the Rules Committee's decision on the next step and said every allegation must be taken seriously.

Fierro said he came forward in part for the benefit of other people who may have had similar experiences.

"Ultimately what really drove me to say something was that I kept getting told by other folks that, 'Hey, look, your story is not unique. There are other folks who have had similar experiences and they might not have the same flexibility in being able to come forward that you do' "
Report a correction or typo
Related topics:
politicsbell gardenslos angeles countysexual misconductharassmentcalifornia state assemblysexual harassmentsacramento
Copyright © 2021 KABC-TV. All Rights Reserved.
More Videos
From CNN Newsource affiliates
TOP STORIES