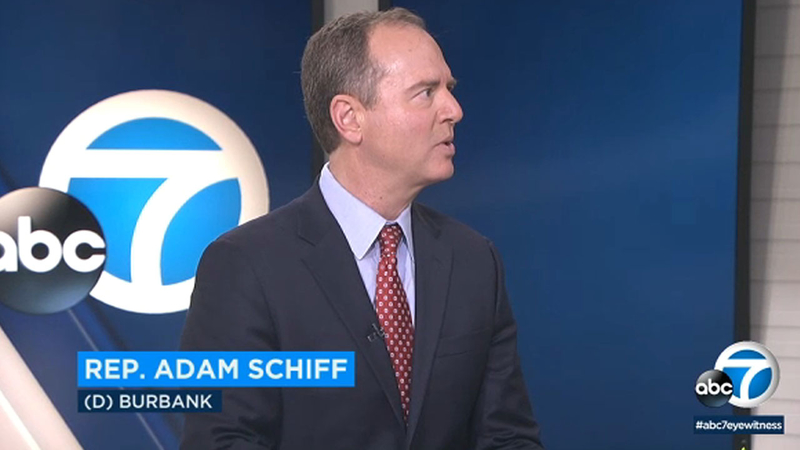 LOS ANGELES (KABC) -- A string of mass shootings across the country in recent days has once again renewed calls for stricter gun control laws, and sparked questions about whether President Donald Trump is doing enough to quell racial hatred and rhetoric.

Thirty-one people were killed and dozens injured in shootings in Dayton, Ohio and El Paso, Texas over the weekend - in addition to the three killed and 16 injured at the Gilroy Garlic Festival on July 28.

The shooting in El Paso was carried out by a suspect described by authorities as a white supremacist.

"We just had a hearing in the Intelligence Committee about this, because the threat domestically from white supremacist violence now I think is eclipsing the threat from the doctrinations of ISIS and al-Qaida and the like in terms of domestic crimes," Schiff said.

Schiff, a Democrat who represents the San Gabriel Valley, stopped by ABC7 to discuss the recent spate of shootings and what action Congress may take to stem future violence.

Schiff is a former federal prosecutor and currently chairs the House Select Committee on Intelligence.

"Most Americans don't realize you can go to a gun store and be turned down because you're a felon and you can leave that store and buy that exact same gun off the back of someone's truck, legally," Schiff said. "That makes no sense to anyone."

"We can speak out against this hate. We can condemn the president when he engages in it. To hear the president today talk about we all need to be united - well he's the biggest part of this problem in terms of using this incendiary language, this dehumanizing language about people coming to this country being invaders."

"This is the same stuff the El Paso shooter was talking about in his manifesto."

And finally he suggested Republicans in Congress need to agree to stronger restrictions on assault weapons.

"I'm tired of my colleagues, who are protecting the rights of mass shooters instead of the rights to their constituents to life, liberty and the pursuit of happiness."
Report a correction or typo
Related topics:
politicsweaponsgun controlsenateel paso shootingmass shootinggilroy garlic festival shootingpresident donald trumpcongress
Copyright © 2021 KABC-TV. All Rights Reserved.
More Videos
From CNN Newsource affiliates
TOP STORIES