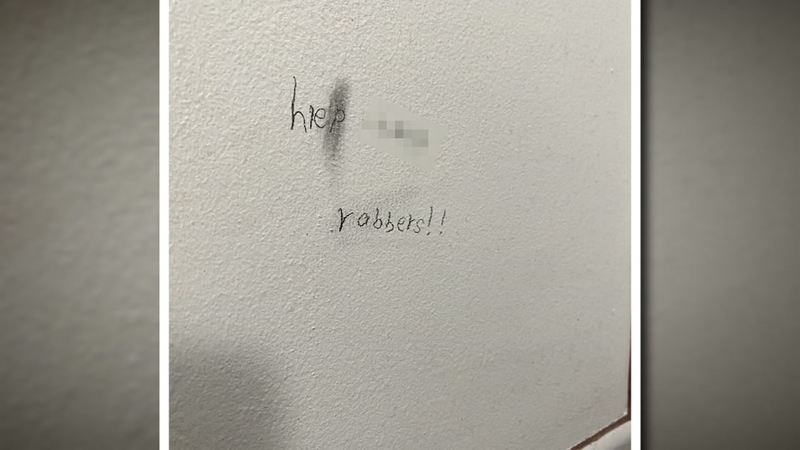 SAN FRANCISCO -- A San Francisco girl scrawled "Help... Robbers!" on a wall in the bathroom she was forced to stay in by one of two men who ransacked her family's home in the Portola district of San Francisco Friday afternoon.

The girl's cousin, who is the homeowner, wants to stay anonymous, but shared with Dion Lim, an anchor with ABC7's sister station ABC7 News in San Francisco, details of what happened after he returned home from a cemetery in Colma that day.

The homeowner's horrifying day started when he discovered his car had been broken into after picking weeds and tidying up family members' graves. Little did he know he would return to the Portola home he has lived in for 28 years, to find his belongings strewn about and thousands in currency and cameras stolen. He showed Lim the cases that were ripped from pillows so the thieves could use them as bags to haul more items.

He recalled how his 11-year-old cousin was grabbed by the shirt by one of the men and forced into the bathroom, where she scrawled her message in pencil.

The girl was terrified that she was going to be kidnapped or killed and wrote the message on the wall, along with her name, which ABC7 News has redacted for privacy reasons. The girl was not hurt.

This crime comes at a time when Asian Americans are on edge due to a wave of attacks targeting the Asian American and Pacific Islander community. Law enforcement agencies have warned Asian American families not to keep large amounts of cash at home, especially after the Lunar New Year.

The San Francisco Police Department's Burglary Detail is investigating this incident. Anyone with information is asked to call the SFPD 24-Hour Tip Line at 1-415-575-4444 or Text a Tip to TIP411 and begin the text message with SFPD. You may remain anonymous.

If you would like to make a donation to help the family, you can visit this GoFundMe page.