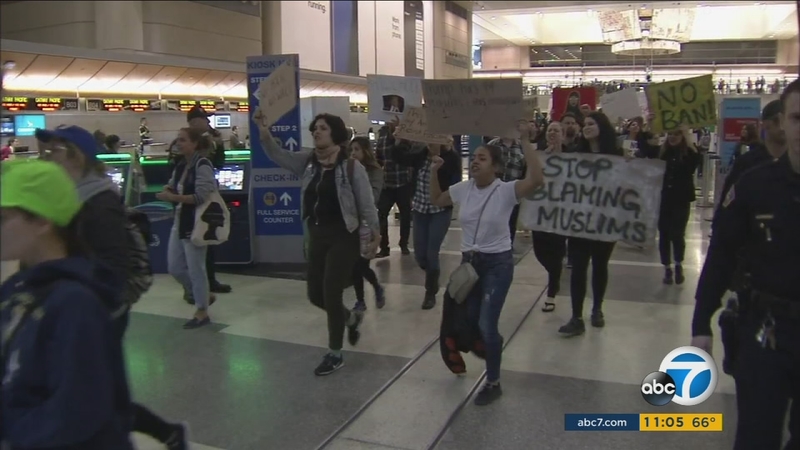 LOS ANGELES (KABC) -- Protests are continuing at LAX and other airports around the country where refugees and people from seven Muslim-majority countries are being detained under an executive order from President Donald Trump.

Immigration attorneys gathered at Los Angeles International Airport and held signs offering help to anyone who has been detained under Trump's order.

Those who had family members detained described the policy as inhumane and unjust.

The White House has also clarified that people who have green cards will not be denied entry to the United States, but may face extra questions before entering.

The Department of Homeland Security said it is working with airlines to prevent people who won't be allowed in the country under Trump's order from getting onto airplanes in foreign countries in the first place, looking to reduce problems at U.S. airports.

Sunday night as families were reunited with members who had been detained for extra questioning, thousands of people protested at LAX, blocking the upper and lower levels for vehicle traffic.

Protests continued on Monday at LAX, joined by a union for airport workers as well as travelers who joined the demonstrations while waiting for their flights.

"This is our battle," said Robin Wilson, with the SEIU, United Service Workers West. "This is everybody's battle. It's not right what Trump is doing."

The group had originally planned to protest over the status of its contract negotiations but changed its plan based on the news about Trump's order.