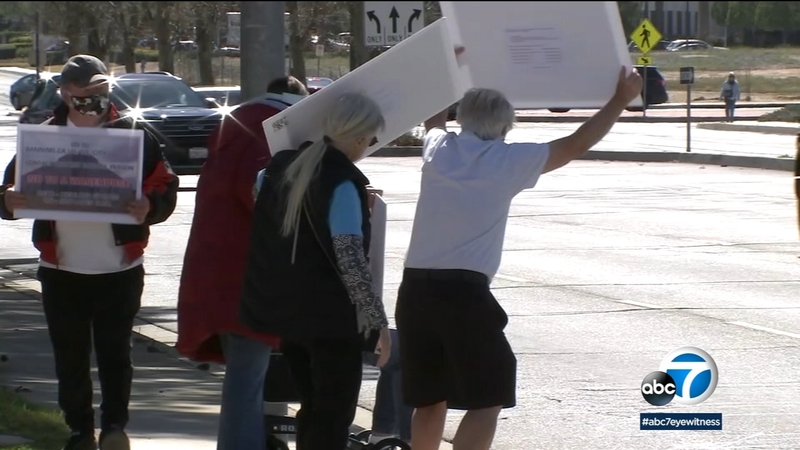 BANNING, Calif. (KABC) -- Protestors lined up on Highland Springs Avenue in Banning Wednesday afternoon, holding signs urging the community to get behind their efforts to stop a proposed warehouse project.

"My understanding is there is no current tenant but it is zoned for a full distribution center with e-commerce capabilities," said Randy Robbins with Pass Action Group.

The group is made up of mostly senior citizens from the Sun Lake Country Club, a community for those over 55 years old.

The proposed 47-acre Banning Point Project would erect a 620,000-square-foot warehouse across from the senior community and an assisted living community.

"It doesn't make sense to bring warehouses right next to residential areas, especially when you have senior citizens living there," said MaryAnne Putnam.

The Riverside County Sheriff's Department released shocking video on Tuesday of a deputy-involved shooting that broke out at the drive-thru of a fast food restaurant.

Despite opposition to the project, the city's planning commission voted to move forward with the project.

The Pass Action Group filed an appeal citing concerns with pollution and traffic.

"You don't put industry in a residential area. Pollution, semi-trucks 24/7 going. You just don't do that," said Putnam.

In response, the city's manager told Eyewitness News the city is addressing the residents' concerns.

The city plans to bid out a project to expand Sun Lake Boulevard that would reduce traffic impacts on Highland Springs Avenue by 60%.

It also want to add a fire station to the south side of the city. Development fees would pay for the upgrades.

Still, residents aren't convinced a large-scale warehouse is what their community needs.

"Other types of light industrial business parks could be acceptable to myself and most members of my community, but the full truck-based business is a problem," said Robbins.

The decision to move forward with the project now falls to city council.

A meeting will be held to discuss concerns raised by the Pass Action group on Thursday. The group says if the city moves ahead, they plan to file a lawsuit.