At one point, an officer became trapped underneath a vehicle as shots were being fired.
KABC 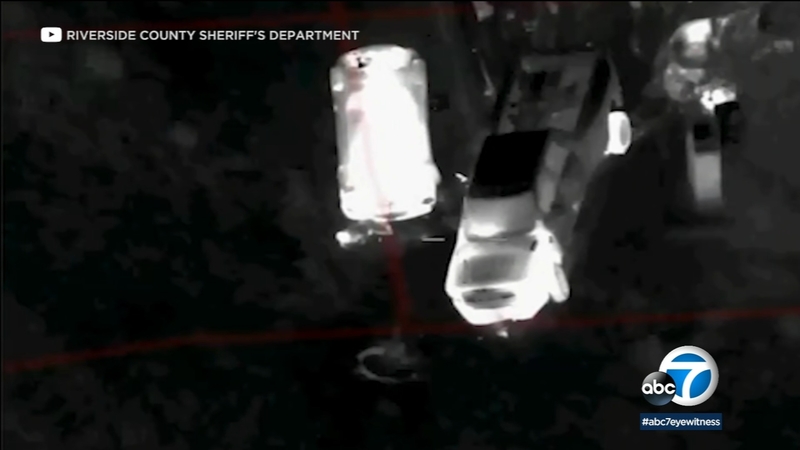 BEAUMONT, Calif. (KABC) -- The Riverside County Sheriff's Department released shocking video on Tuesday of a deputy-involved shooting that broke out in the drive-thru line of a fast food restaurant.

The incident happened on New Year's Eve at a Del Taco restaurant in Beaumont.

According to the sheriff's department, the suspect - 44-year-old Dennis McHugh of Glendora - had multiple felony warrants for his arrest, including one related to a domestic violence dispute, assault with a deadly weapon and a kidnapping.

Authorities say he was also in violation of a restraining order in Woodcrest.

In the video, McHugh is seen driving a large pickup truck when deputies approach him and order him to step out. That's when he steps on the gas instead.

A sheriff's department helicopter captured the entire incident as it was unfolding on its night vision camera. The video shows McHugh hitting several cars and a number of police units as he tried to escape.

Shots were fired shortly after, according to investigators. Deputies say an officer became trapped underneath a vehicle as the shooting was unfolding.

Even while pinned down, that officer was able to fire his gun.

The video shows officers moving in trying to free the trapped officer. That's when McHugh hits the gas again. The officer was rescued and rushed to the hospital. He continues to recover.

Multiple use of force investigations have been launched to analyze the initial response of deputies, the actions of McHugh, and the shooting itself. The Riverside District Attorney's Office is also reviewing the case.