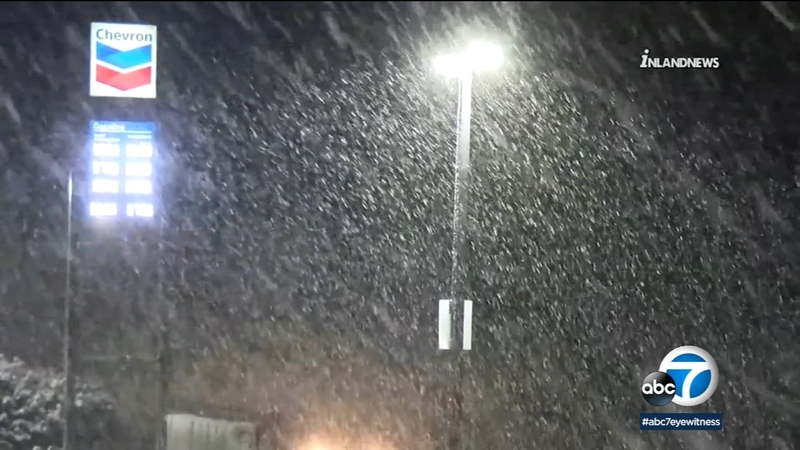 LOS ANGELES (KABC) -- A mid-winter storm rolled across Southern California on Saturday, bringing cold weather and rain to a region that only a week earlier had seen dry conditions and high temperatures that raised the risk of fire danger.

The current weather system, the first of several that were headed toward the region, dumped moderate rainfall in Ventura and Orange counties in the late morning and early afternoon, and light showers are expected through Sunday, the National Weather Service said.

There was a slight chance of afternoon thunderstorms in the Los Angeles County area, where up to two-tenths of an inch of evening rain is expected.

Some communities, like Woodland Hills, saw hail fall from the skies, while mountain communities near the Cajon Pass were dealing with snowfall.

The next storm, set to arrive Sunday evening and last through early Tuesday, will be marked by low snow levels and light-to-moderate precipitation, the agency said.

About one-third of an inch of snow could fall in local mountain areas above 3,500 feet, with an inch falling across the Tejon Pass through the 5 Freeway corridor, while the resorts in the eastern San Gabriel Mountains could see 2-3 inches through Saturday evening, forecasters said.

Southern California will see a cold and wet Saturday as the first of several storms moves into the region.

At Big Bear Mountain resort on Saturday, skiers and snowboarders were seen enthusiastically taking to the slopes and fresh powder continued to fall.

A period of dryness will intervene Sunday before the next storm moves in. Conditions will be even colder by Sunday night, when another system drops snow levels to 2,500 feet by Monday.

A winter storm watch is scheduled to remain in effect until 10 p.m. Monday for the San Gabriel and San Bernardino mountains, as well as northern Ventura County.

The third and strongest system is expected to arrive by mid-week, lasting through Friday. It could drop more than a foot of snow on mountain communities.