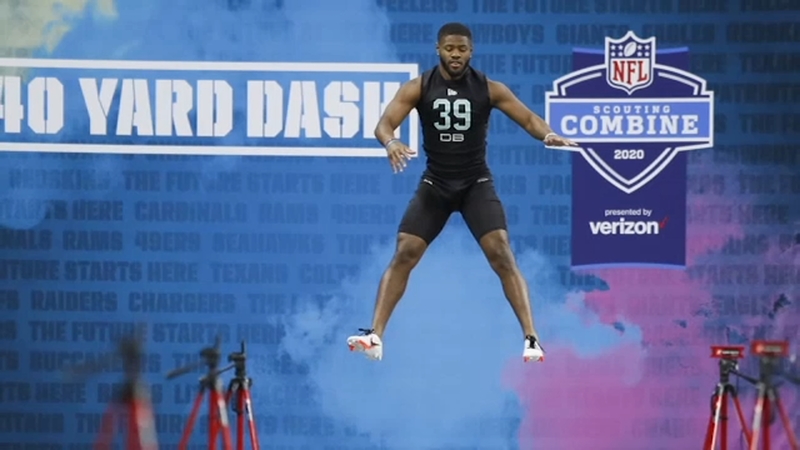 THOUSAND OAKS, Calif. (KABC) -- The NFL draft is reality TV at it's finest.

And nothing can increase the drama of a virtual draft like knowing when you're up, the internet goes down.

"We're getting close to making the first pick, and had not any trouble at all through all these meetings, about a month of meetings, but 10 picks away" it went down, said general manager Les Snead.

The Rams IT team had it back up in time to take Florida State running back Cam Akers in the second round , 52nd overall.

He was the nation's No. 1 recruit coming out of high school, and will now help fill the void vacated by the release to All-Pro Todd Gurley.

Due to the current state and the coronavirus pandemic, the 2020 NFL Draft will be done completely in the virtual world.

"I think what he does, he adds great value to that group," said head coach Sean McVay. "That's the way we're looking at it right now."

They also landed high-flying wide receiver Van Jefferson from the University of Florida. His dad Shawn Jefferson played in the NFL, including two Super Bowls, and is now an assistant coach with the Jets.

"You say, what is a receiver suppose to do?" McVay asked. "Separate and catch the football, and I think this guy does that as well as anyone in the draft. He's a coaches kid, he plays like a coaches kid that's been around NFL caliber players. He looks like he's been running routes in training camp since he was 10 years old."

The Rams addressed their defensive needs in the third round, taking Alabama linebacker Terrell Lewis.

He was asked how playing for the Crimson Tide prepared him for the NFL.

"Honestly, I didn't' get a chance to get everyone's reaction because I was crying so much Burgess said.
But I know my mom is really excited I get to stay home."

McVay added, "It was a great day. I think to be able to come away with four players -- all that we had a real high appreciation for -- and they also happen to fill some needs."