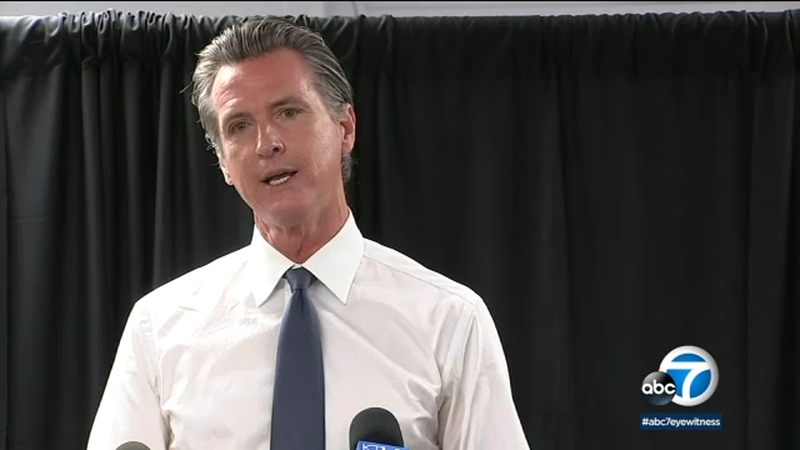 Newsom made a campaign stop in Los Angeles ahead of an event in Northern California on Wednesday, where he will be joined by Vice President Kamala Harris.

He's the front-runner among the recall hopefuls and has been critical of California's school system, it's criminal justice system, and mostly how Newsom has handled the pandemic.

"This man, Gavin Newsom, shut down this state while ignoring science," Elder said Monday. "At the French Laundry restaurant, with the very people that drafted the mandates that he was not following."

However, a new controversy swirling around Elder. In an appearance on Prager University's "Candace Owens Show" back in July, Elder said the following about slave owners:

"Like it or not, slavery was legal and so their property, their legal property, was taken away from them after the Civil War. So you could made an argument that the people that are owed reparations are not only just Black people, but also the people whose quote property close quote was taken away after the end of the end of the Civil War," he said.

Newsom warns that Elder is dangerously far-right and intends to unwind many of California's COVID safety protocols that have made it the state with the second-lowest case rate in the country.

"He before his first cup of tea after getting sworn in that he'll use the power of an executive order to eliminate mask-wearing in the state of California for all our public kids...but he'd do the same by eliminating any vaccine verification for public health employees and health care workers," the governor said at a voter registration outreach center in La Brea.

The governor also campaigned with Sen. Elizabeth Warren, D-Massachusetts, on Saturday and Sen. Amy Klobuchar, D-Minnesota, on Sunday. Their message: The race will come down to voter turnout on Sept. 14.

"This is a day where the citizens of California stand up and say, 'No, we own this democracy,'" Klobuchar told a crowd of supporters in Pacific Palisades. "And that is why you will vote no on the recall."

At the same rally, Newsom said: "The stakes couldn't be higher. Trump was defeated in 2020 but Trumpism has not been defeated in this country. We have a chance to defeat Trumpism on Sept. 14."

Jenner's event was expected to be held in Oxnard.

More than 100 polling places opened Saturday in Los Angeles County for early in-person voting. Voters can find their nearest location at lavote.net, though they can cast their ballot at any of the polling places. The early voting sites are open from 10 a.m. to 7 p.m. through Sept. 13.