Video of a traffic stop that shows an African American man being pulled out of his car by Redlands police sparked protests by multiple groups Tuesday.
KABC 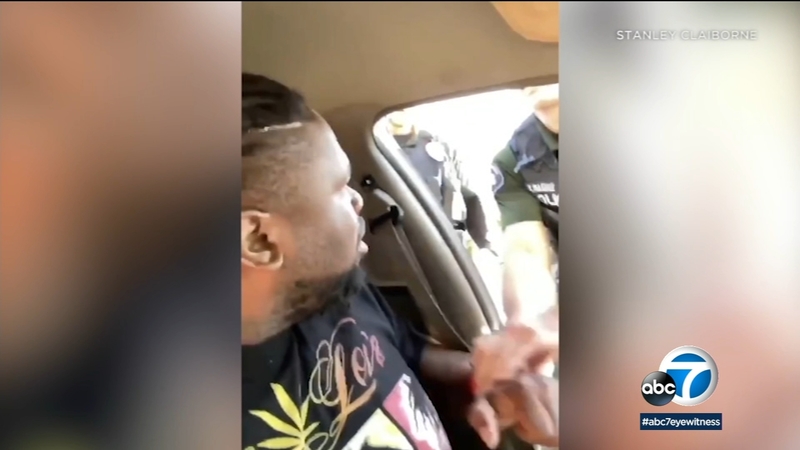 REDLANDS, Calif. (KABC) -- Video of a traffic stop that shows an African American man being pulled out of his car by Redlands police sparked protests by multiple groups Tuesday.

Black Lives Matters supporters and other protesters marched to the Redlands police station, where a pro-police crowd gathered outside.

The driver in the video, Stanley Claiborne, says he was stopped by Redlands police for a broken brake light and tinted windows but did not understand why officers were forcing him out of his car.

Disturbing video shows what appears to be a controversial use of force by a Los Angeles County Sheriff's deputy entering a vehicle.

In the video, Claiborne asks why he has to get out of the car.

"Look at him, now he's trying to drag me out of the car. What are you doing?" Claiborne says before an officer grabs his wrist.

When he exits the vehicle, officers attempt to handcuff Claiborne.

"Let go of me," Claiborne says while officers restrain him. "What you scared of? Obviously you're scared."

Redlands police say the videos do not show the beginning of the traffic stop when officers told him why he was being stopped. Police say after he refused to follow the officers' orders to stop making a third-party phone call, he was instructed to exit the vehicle.

"When he refused to comply with that lawful order, officers applied minimal force to gain compliance," Redlands police said in a statement.

Police say based on their review, "There was no violation of policy or of the law by Redlands Police officers."