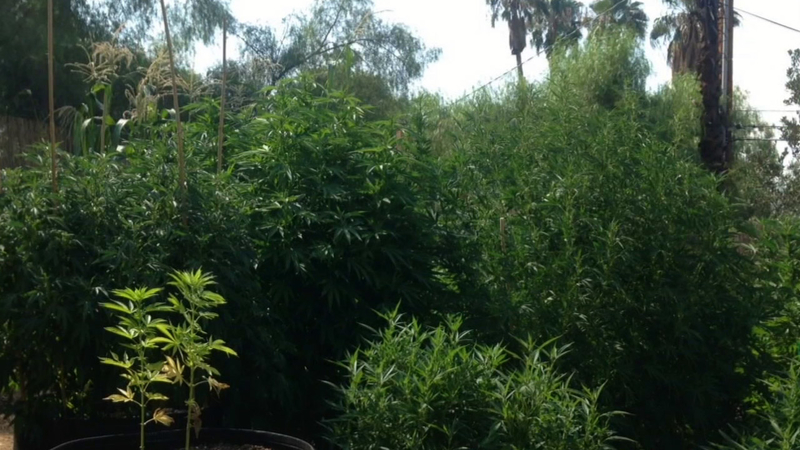 RIVERSIDE, Calif. (KABC) -- A Riverside neighborhood is upset as a major marijuana home-grown operation with nearly 600 plants sits right near their backyards. The only problem is that the operation is completely legal.

ABC7 talked to several neighbors who expressed their frustrations and concerns with the operation that grows marijuana inside the home and in the backyard.

Laura and Chris live nearby the home and asked ABC7 not to use their last names because of concerns for their safety.

"I was shocked, and I was scared," Laura said. "There were lights glowing inside the tents."

"There are times we cannot use our backyard because of the smell," Chris said.

Many residents ABC7 spoke with complained about the smell, but also said they worry about property values being diminished and most importantly, the element a grow operation they said brings to a neighborhood.

"If bad guys knew this was here, there would be a home invasion. They'd steal the plants, they'd come in with guns, I don't need people like that in my neighborhood. I don't need to live in fear that they find the wrong house," Chris said.

Riverside Police raided the home eight months ago and many neighbors thought the growing operation would finally be shut down.

But they were wrong. Police didn't arrest anyone nor take a single plant.

"They left, the police untied them, they walked back into the home, and the police left," Laura said.

Neighbors said nothing has changed since that day.

"This is a very prevalent problem, and it's not just this neighborhood," Riverside Police Chief Sergio Diaz said.

Diaz said the same issue is happening in numerous places because the city of Riverside, like many others, doesn't have an ordinance in place to prevent it.

"This activity, as offensive and worrisome as it might be to the neighbors, is actually being conducted in a legal way," Diaz said. "It's very difficult and frustrating to us."

ABC7 went and knocked on the door. We spoke to Derrell Stanfield, who said he's been growing marijuana at the home for about a year and a half.

When asked about his neighbors' concerns, he said, "I wish they would have said something to me, but I am working on getting it out of here."

ABC7 asked Stanfield if he believed a marijuana growing operation should be conducted in a residential neighborhood.

"If it's done quietly, I mean there are lots of people who do it in residential neighborhoods. It's all over the place, it's just how you do it," Stanfield said.

An ordinance is working its way through Riverside City Hall that would help regulate where legal marijuana growing operations can and can't be located.

The city council is set to take that issue up in December. But for the time being, frustrated neighbors remain frustrated.