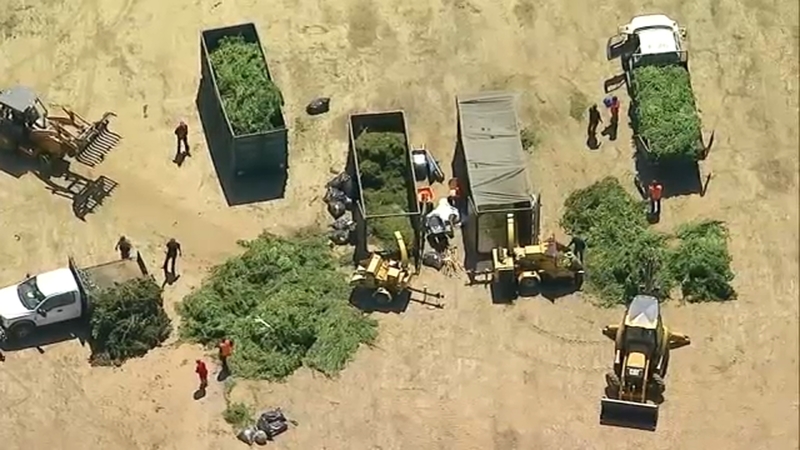 Video from AIR7 HD showed law enforcement personnel bringing large piles of apparent marijuana plants by helicopter to a field near Hamilton High School, where they were being placed in dumpsters.

One by one, the bundles of marijuana were picked up from all across the Anza Valley and flown to the Riverside County Sheriff's Department's command post, and the pot was all destroyed.

One of the helicopters involved in the operation belongs to the California National Guard's counter drug taskforce, which was called to the scene by the Riverside County Sheriff's Office to help, since this was a major drug eradication effort.

A total of 600 personnel were involved in the operation.

"It's people that know what they're doing, they're doing it illegal. The crimes that come out of it is what's our concern," Martinez said.

For example, just last night -- hours before the operation - authorities said they discovered a homicide. A man was shot to death and dumped in front of a fire station.

"I'm not against weed, I'm against our money being shipped out of our country, and our area being trashed," said one Anza resident, who added that the pot growers are destroying the water table.

Authorities don't know how much pot they've collected, nor how many people have been arrested -- but it's progress.

"We hope we're able to take a bite out of it, and that's the way we work, we work in chunks. It might be a little bite today, but you know what, it'll lead us to a bigger bite later," Martinez said.

Martinez added that approximately 90 search warrants were served as part of the operation, and several arrests were made.