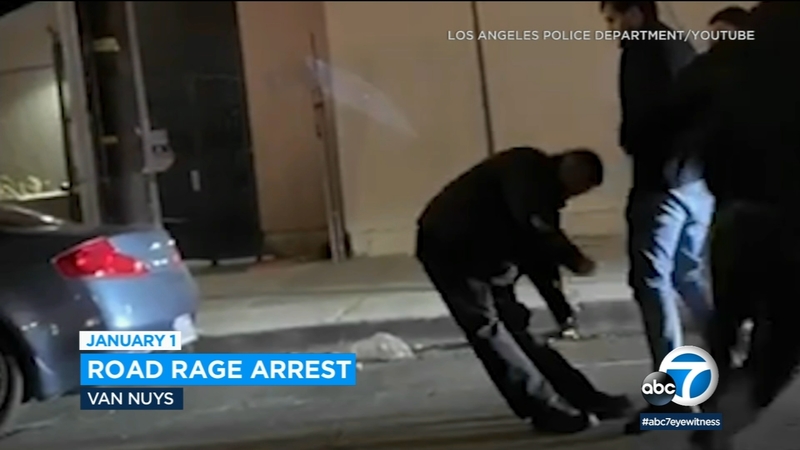 LOS ANGELES (KABC) -- A juvenile who fled to Armenia has been arrested in connection with a January road-rage incident in Van Nuys that left a man in a coma, authorities announced Thursday.

Robert Hovhannisyan and the juvenile were identified as the primary suspects in the New Year's Day attack, which was captured on video by a bystander about 9:30 p.m. near Woodman Avenue and Victory Boulevard, according to the Los Angeles Police Department.

During the dispute, the juvenile armed himself with brass knuckles and struck the victim in the face, the LAPD said. The footage shows the man collapsing to the ground as the suspects flee in a black Jeep.

The family of a man who was left unconscious after a New Year's Day road rage attack spoke out for the first time Thursday.

The arrest for attempted murder was the culmination of an effort by multiple agencies, including the FBI, Department of Homeland Security, Interpol and the Los Angeles County District Attorney's Office, the LAPD said.

Authorities say the juvenile suspect voluntarily returned to the United States and then was taken into custody. Hovhannisyan is still on the loose.

On Jan. 9, the victim's daughter spoke at the car dealership where her father has worked as a service advisor for the past 15 years.

"My father is one of the most hard-working, kind and generous men that I know," said Jennifer Gonzalez. "There was no need for them to do that to my dad. ... He doesn't deserve that."

At the time, the dealership owner offered a $15,000 reward in the case. Whether someone is eligible to collect the reward is unclear.