Former Laker Robert Horry details gut-wrenching conversations with his sons on Jacob Blake shooting, how to interact with police

Former Los Angeles Laker Robert Horry fought back tears Wednesday as he shared raw and emotional conversations he has had with his two young sons on race and policing in America.
KABC 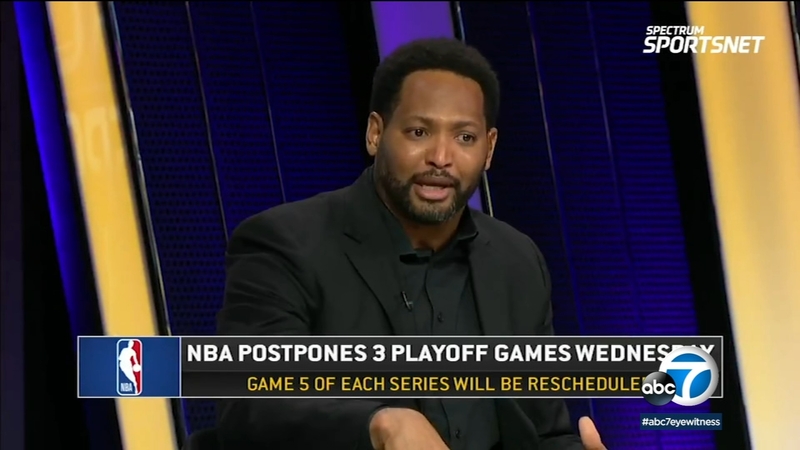 Former Los Angeles Laker Robert Horry fought back tears Wednesday as he shared raw and emotional conversations he has had with his two young sons on race and policing in America.

Horry, who now works as an NBA analyst for Spectrum SportsNet, spoke out about the officer-involved shooting of Jacob Blake after NBA teams -- along with WNBA, MLB and MLS organizations -- decided to strike in an effort to draw more attention to systemic racism in the country.

Horry became emotional as he discussed the conversation he had with his, Christian, about the shooting.

The longtime NBA forward continued to open up about the difficult talks he has been forced to have with his children as a Black father.

"At the end of the day, I want you coming home to me. If you have to lay down on the ground, and they can kick you, beat you, at least you're gonna go to the hospital and you're gonna come home to me," Horry said while recalling the conversation.

Although the Los Angeles Lakers and Los Angeles Clippers had both voted to boycott the remainder of the 2019-20 NBA season, that stance appeared to have changed by Thursday morning.

Horry's daughter, Ashlyn, succumbed to a genetic disorder at age 17 in 2011.

"I already lost one child," Horry said. "I don't need to lose another."

He urged people in every community to fight for racial justice.

Horry -- who played in the NBA from 1992 to 2008 and won seven champions, including the Lakers' 2000, 2001 and 2002 NBA titles -- was slated to work as an analyst for the Lakers' Game 5 playoff game against the Portland Trail Blazers on Wednesday night. But those plans changed after the Milwaukee Bucks opted out of their playoff game against the Orlando Magic, causing a ripple effect throughout the league and across the professional sports world.