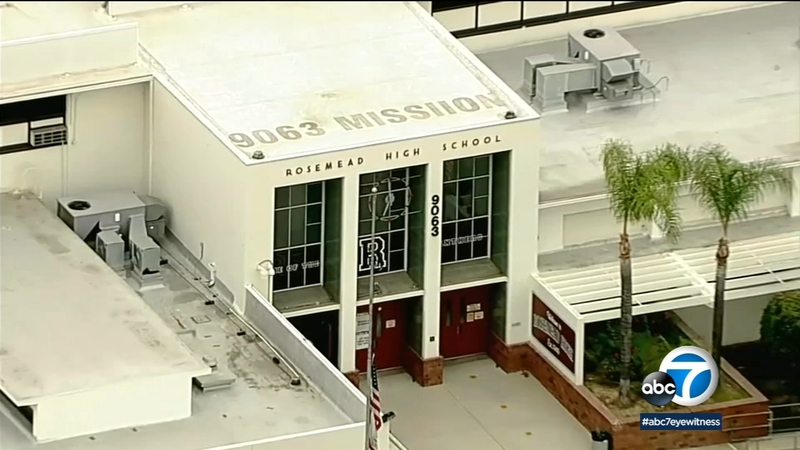 ROSEMEAD, Calif. (KABC) -- An online threat to a school identified only as "RHS" has led to the closing of Rosemead High School and possibly others around the country on Friday.

Local authorities say they closed Rosemead High School out of an abundance of caution and not any indication that the threat was specifically directed toward that campus.

"Out of an abundance of caution, classes and all school events at Rosemead High School have been canceled for today, Friday, May 27. The school will remain closed for the entire day."

Los Angeles County Sheriff's Department investigators believe the threat may have originated in Raymondville, Texas. Media reports indicate a student was arrested there on Thursday for making school threats.

Still, a handful of other schools around the country with the initials RHS are also taking precautions.

The threat is said to come from a Snapchat account, but the contents of the threat were "vague," prompting the response by multiple schools with the initial "RHS" in the country to investigate.

Students at Rosemead High were ordered to stay home today after a shooting threat potentially involving multiple high schools was posted to Snapchat & Instagram. Staff are having an emergency meeting this morning. LA Sheriff's deputies are on campus now. No reports of violence...

The suspect threatened to shoot up "RHS" and the post went viral, according to local authorities.

Additionally, Rosemead High was vandalized overnight, according to reports. It was unclear if the vandalism and social media threat were related.

Several Los Angeles sheriffs and police divisions are all investigating the threats.

"Following District protocols, administration immediately notified the District office as well as the Los Angeles County Sheriff's Department (LASD)," said Superintendent Dr. Edward Zunga in the statement "In working with the LASD, the District was informed that the threat originated in Raymondville, Texas and that it was confirmed that the threat was not directed at Rosemead High School.

"The LASD confirmed that [Friday's] incident was not a credible threat to our school community."