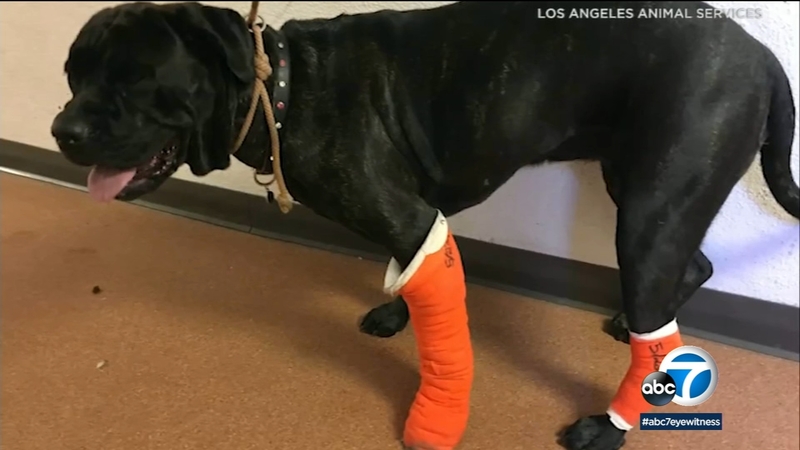 LOS ANGELES (KABC) -- The two dogs that were caught up in a dangerous RV chase through the San Fernando Valley on Tuesday are safely in the custody of animal services and are recovering from injuries, officials say.

One of the dogs had broken bones and had two legs wrapped in a cast, according to images provided by Los Angeles Animal Services.

The two dogs were in the stolen RV when a woman led police on a high-speed chase from Santa Clarita to Tarzana, smashing into six other vehicles and shredding off the side of the motorhome.

The crashes knocked out the vehicle's windshield and at one point during the chase, one of the dogs was hanging out the front window as the woman struggled to keep it in the vehicle. The dog slipped out of her hands and jumped out of the moving vehicle, falling to the street and then running off into the neighborhood.

The second dog remained with the woman through the chase, running with her as she fled on foot and staying at her side as police tackled her and took her into custody. The animal was leaving bloody footprints at the scene.

Animal services officers were able to find the dog that fled and took it into custody along with the other dog that stayed with the woman. Both animals were safe and recovering.

The suspect was later identified as Julie Ann Rainbird, 52, of Winnetka. Authorities say she was under the influence of drugs or alcohol during the chase. The RV had been reported stolen from Giant RV in Downey.

A former neighbor said Rainbird had often been in trouble in the past.

"She moved out a long time ago, but there was always problems with her," Helga Schank, who watched Rainbird grow up next door in Chatsworth, one of three children. "Drugs. I didn't know too much about it but I know she had trouble with drugs."

Criminal records back that up. Rainbird has convictions for trespassing and possession of methamphetamine and a current case in court for identity theft.