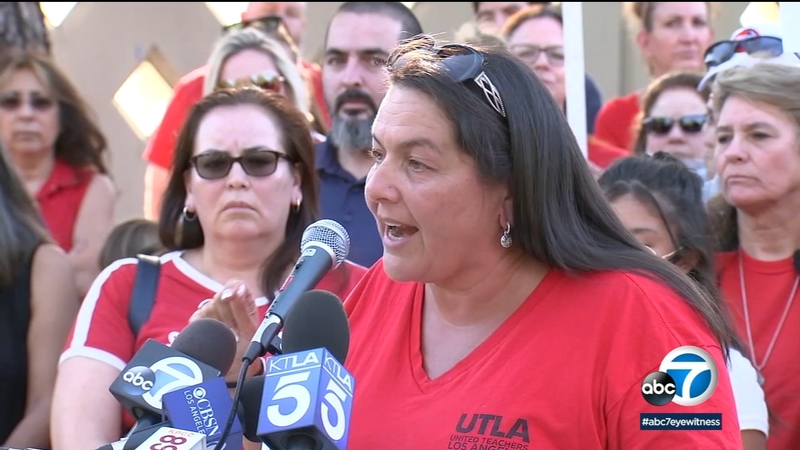 Those taking part in the rally at Van Gogh Elementary School said in the aftermath of the blaze, classrooms were full of ash, and the smell of smoke was strong - yet -- they were told return. The students were given face masks to protect them.

"This was an atrocious decision. We should have shut it down. We should have been evacuated to another school, whatever they want to do, but not stay here," said Lisa Bennett, a special education teacher at Van Gogh Elementary, at the rally.
EMBED More News Videos

Teachers and parents are expected to hold a protest outside Van Gogh Elementary School Tuesday at 3 p.m. about LAUSD's response to the Saddle Ridge Fire.

"We trusted that everything was clean, that's what we were told," said teacher Jamie Malkin.

LAUSD released this statement, in part, to Eyewitness News:

"Maintenance crews returned Monday night to the 10 schools in the Saddleridge Fire evacuation area, and were back at impacted campuses this morning, to provide additional cleaning needed to ensure the safety and well-being of our students."

Another round of dangerous fire conditions is raising concerns in the San Fernando Valley, less than a week after the destructive Saddle Ridge Fire erupted.

Some of the parents said they were OK with what the district did to clean up the mess left by the fire.

"It seems like they're taking care of them pretty well," one mother said.

"I think the teachers and the staff, the administrators did the best they could," said another parent, Adriana Velasco.

In Porter Ranch, you can still smell the smoke. Resident Karis Christensen said the smell isn't as bad as it was a couple of days ago.

He's put in a couple of air filters and used some household products to get the stench out of his house.

"In the morning when it's damp, it's worse, but what we did is, we were using air cleaners that we got for when there was the gas leak and we were just running those all the time and the air condition and then using Febreze and Lysol and we were able to knock down the smells," Christensen said.

Teachers attending the rally said they hope to sit down with district officials to talk about setting a plan in place to clean schools after fires.

A 7-year-old boy in Porter Ranch is receiving praise for his quick-thinking actions after he alerted his neighbors when the Saddleridge Fire erupted.