GRANADA HILLS, LOS ANGELES (KABC) -- Parents and teachers are speaking out and voicing their frustration with the way they say Los Angeles Unified School District handled issues related to the Saddle Ridge Fire.

The Saddle Ridge fire left parts of the northern San Fernando Valley full of ash and smoke, including dozens of schools such as Van Gogh Elementary in Granada Hills.

Parents and teachers were told that a cleaning crew spent 12 hours at the school Sunday, but when faculty arrived Monday morning, they said classrooms were not ready for students.

"Once I got there it was absolutely atrocious. The smell was... within minutes your throat started to scratch, your eyes were watering a little bit, and then getting into the actual classroom, it was way worse," said Lisa Bennett, a special education teacher at Van Gogh Elementary.

Students like Ethan Rekrut, who suffers from asthma, said he felt the effects of the fire the minute he stepped into his fourth-grade classroom.

"I couldn't breathe. It felt like a whole cloud of smoke was laying in the classroom," he said. "Ash was everywhere, like raining ash."

The cause of the nearly 8,000 acre Saddle Ridge Fire is still undetermined, but Los Angeles Fire Department investigators have identified the starting point of the fire.

The district responded to the complaints by sending another cleaning crew that arrived at 11 a.m. Monday, forcing some students and teachers outside.

Parents and teachers tell Eyewitness News that school should have been closed on Monday.

"We received a notification from (South Coast Air Quality Management District) that for children, elderly and people with respiratory problems, that they should stay indoors," Bennett said. "Only, being indoors for us was actually worse."

A wild rabbit is on the road to recovery after it was seen with singed fur scurrying away from the burning woods set ablaze by the Saddleridge Fire in Porter Ranch last week.

In a statement, LAUSD said further cleaning was taking place and that "Filters in the ventilation system were replaced over the weekend, and we are running air-conditioners in classrooms to filter residual smoke. We are also limiting outdoor activities, as needed, this week."

"When there's a fire or any natural disaster happens, there should be something in place during and immediately after that they can follow guidelines," said parent Allison Rekrut.

The teacher union and parents are planning to hold a protest outside Van Gogh Elementary School Tuesday at 3 p.m. about LAUSD's response to the Saddle Ridge Fire.
EMBED More News Videos

Teachers and parents are expected to hold a protest outside Van Gogh Elementary School Tuesday at 3 p.m. about LAUSD's response to the Saddle Ridge Fire. 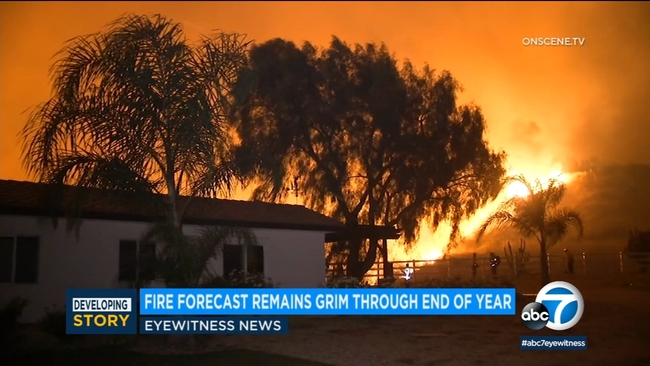