A police shooting outside a liquor store in San Bernardino Thursday night left a man dead, with the officer firing several rounds at point-blank range in an incident caught on camera.
KABC 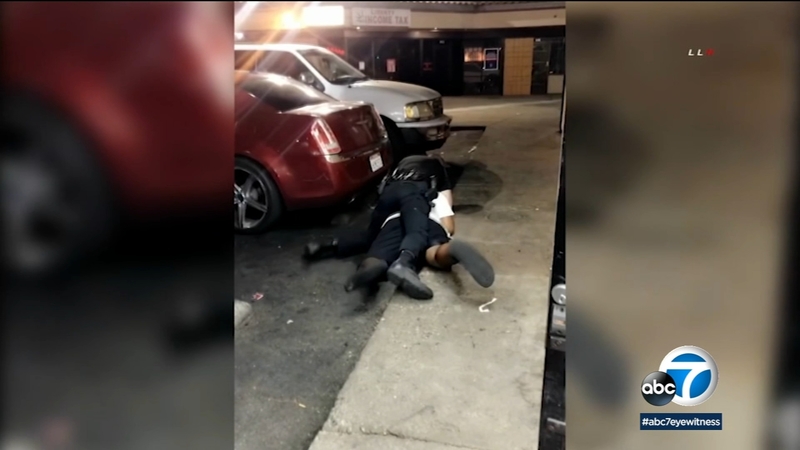 SAN BERNARDINO, Calif. (KABC) -- A police shooting outside a liquor store in San Bernardino Thursday night left a man dead, with the officer firing several rounds at point-blank range in an incident caught on camera.

Police initially received a disturbance call at the King Tut Liquor store near the intersection of Baseline Street and Waterman Avenue at about 11:30 p.m.

"There was a man jumping on vehicles in the parking lot of that location," said San Bernardino police Sgt. John Echevarria.

Audio from a 911 call made before officers arrived supports that statement. The female caller mentions a man jumping on top of cars and can be heard saying "he's just going crazy."

The nearest officer responded to the scene within minutes, called for back up and ordered the man down, according to authorities.

"The suspect refused to follow those commands and attempted to walk inside the store behind me," Echevarria said. "That store was occupied by employees and citizens."

The responding officer's body camera was on and rolling as he approached the man and drew his weapon. The man continued to walk away from the officer. A few seconds later, the camera goes dark as they fall to the ground.

However, the audio kept recording and the officer can be heard saying "Stop fighting, dude."

The man was later identified as 35-year-old Mark Matthew Bender Jr. of San Bernardino. Bender had previously been arrested for domestic violence, theft, drug possession, DUI and possession of a firearm.

Video taken by a bystander shows the officer taking Bender to the ground and briefly get on top of the 6-foot-3, 300-pound man's back.

As the struggle continues, the man appears to resist and reach for an item in his waistband or pocket before getting up. Police later confirmed that Bender had a gun, which was found at the scene.

The officer then takes a few steps back and opens fire. Multiple gunshots are heard in the video.

The video does not show the beginning of the incident.

It is unclear if the officer was injured in the struggle.

Police cordoned off the area where the shooting took place and a small crowd gathered nearby, with some confronting officers.

"Dude was coming out and he started fighting that dude, and the dude tried to get up and all we heard was 'bam bam bam bam,'" a witness said. "He shot the man. The police shot that man."

One woman was heard yelling near the scene, with several people running over to console her.

Emotions boiled over as multiple people were seen shouting at officers.

"That young man was shot for nothing. The paramedics are still not here -- it's been past 15, 20 minutes." said Gregory James Robinson. "Something needs to be done about San Bernardino PD doing this to people."

A press conference Friday morning became heated as members of the community shouted questions at Echevarria. People could be heard shouting about why the man was shot and questioning why the officer allegedly had his gun drawn as he was exiting his police cruiser.

Echevarria, however, said the officer's weapon was holstered until he got up during the scuffle and opened fire.