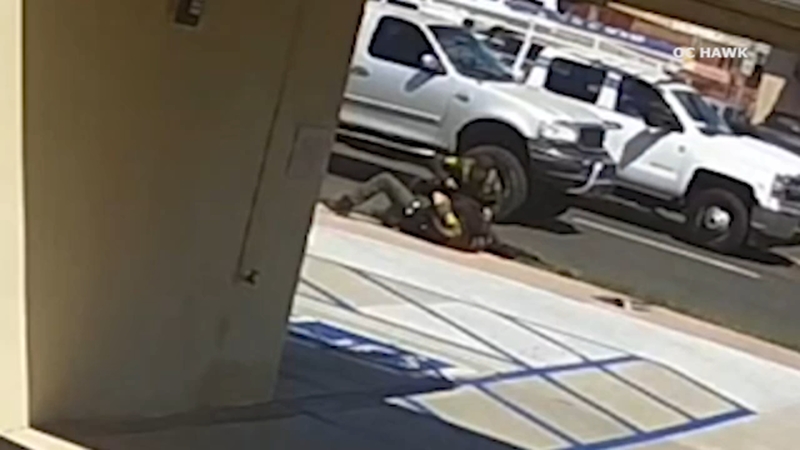 SAN CLEMENTE, Calif. (KABC) -- Surveillance and cellphone video shows the struggle between a homeless Black man and homeless outreach deputies with the Orange County Sheriff's Department in San Clemente before the man was shot and killed.

On Wednesday afternoon, the deputies approached the man, identified as Kurt Andras Reinhold, outside of the Hotel Miramar and a physical altercation occurred.

During a Thursday afternoon press conference, Sheriff Don Barnes said the video shows the man grabbed one of the deputy's weapons and apparently tried to pull it out of its holster.

"You'll see it was significant struggle with Mr. Reinhold that went on for some time. The deputy did state four different times 'He's got my gun'," he added.

One of the deputies fired two shots, killing the 42-year-old.

The deputies involved were an 8-year and a 13-year veteran of the department.

Barnes also urged everyone to reserve judgment until the investigation is complete.

"Given the current climate of police community relations, I understand that this conversation is going to be a difficult one around this incident," Barnes said. "I'd ask that those who are entering the narrative to please let the course take its place. Let the investigation conclude."

Barnes said Reinhold had been in the San Clemente area for the past 30 days, during which time homeless liaison deputies had tried to make contact with him several times. Reinhold had previously been offered services but was "not receptive," the sheriff added.

Barnes declined to offer a specific reason for why the deputies had approached him, pending their official statements regarding the incident.

Dozens gathered in the area on Thursday to protest the shooting and make their voices heard. Some demonstrators entered the street and tried to block traffic, resulting in the arrest of at least five people for disturbing the peace and some minor vandalism to a patrol car.

"He was unarmed and he should be alive today. We want the community to finally wake up to the racism down here and bring an end to it and fight in solidarity with Black lives rather than against," said one protester named Fiona.

Later in the afternoon, the San Clemente City Council held an emergency meeting and approved a 9 p.m. curfew for the city's downtown area and the Pier Bowl. The curfew was set to expire at 6 a.m. Friday morning.