The shooting death of a homeless man by a sheriff's deputy outside a San Clemente hotel has raised questions about how law enforcement interacts with the homeless.
KABC
By Tony Cabrera 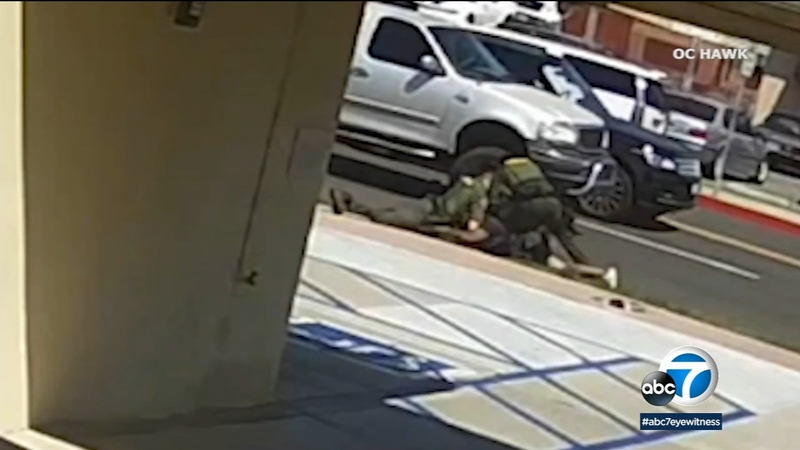 SAN CLEMENTE, Calif. (KABC) -- The shooting death of a homeless man by a sheriff's deputy outside a San Clemente hotel has raised questions about how law enforcement interacts with the homeless.

Both the Orange County Sheriff Don Barnes and local advocates for the homeless community are calling for a new approach.

Video taken by a hotel surveillance camera captured the incident Wednesday afternoon. Two homeless outreach deputies had attempted to stop 42-year-old Kurt Andras Reinhold in the street. The encounter ended in a struggle in which Reinhold is accused of grabbing one deputy's gun, prompting the other deputy to fire.

Surveillance and cellphone video shows the struggle between a homeless Black man and homeless outreach deputies before the man was shot and killed in San Clemente.

There are questions over why the deputies approached Reinhold in the first place. While Barnes says the homeless outreach team is trained for de-escalation, he also believes there needs to be overall changes to the system, with more resources put toward other intervention methods.

"Those intervention strategies are not robust and don't exist, and when they don't, these problems manifest and eventually fall on the shoulders of law enforcement to deal with," Barnes said.

Homeless outreach organization City Net believes in a multi-disciplinary approach with a team of experts - everything from a social worker to a substance abuse counselor to a housing expert.

"We need those funds to be integrated and craft those teams. This multi-disciplinary teams so that we have a really strong response to support an individual that may be in need of those services," said Chelsea Bowers with City Net.

City Net facilitates services across Orange County, including in San Clemente, where at last count there were about 145 homeless residents. Although they partner with law enforcement on certain calls, there was no collaboration in the Reinhold incident.

"To have it at the ready and available right there on the field, I think would be really powerful and driving solutions toward some of these instances that have been reoccurring," Bowers said.

San Clemente's Mayor Pro-Tem Laura Ferguson says it's something the city council can consider, but she added that they've already taken steps through partnerships with City Net and the sheriff's department.

"I feel very confident in Orange County Sheriff's Department," Ferguson said. "They've got the manpower, womanpower, and they're there to protect and serve our community and have done so."

A person who says she knows Reinhold says there's a difference between offering assistance and forcing assistance, questioning how a welfare check could turn into a shooting.

Meanwhile, one of Reinhold's friends, who met him at church, is demanding answers.

"He would literally give you the shirt off his back if you needed it. Somebody you could depend on, always there," said Keith Terrell.

Five arrests were made Thursday at a protest over the shooting, beginning in front of the Hotel Miramar at El Camino Real and Avenida San Gabriel -- the area where the incident occurred.

Four people were taken into custody for disorderly conduct, and one was arrested for vandalism, Barnes said.

About 40 to 50 protesters were acting peacefully'' when a handful stepped out into the street.

"Those who refused to get out of the street were arrested,'' Barnes said, noting that one of the suspects is accused of scratching a patrol car.

A curfew in portions of San Clemente went into effect overnight Thursday, but the city council voted not to extend the curfew Friday night, according to Ferguson.