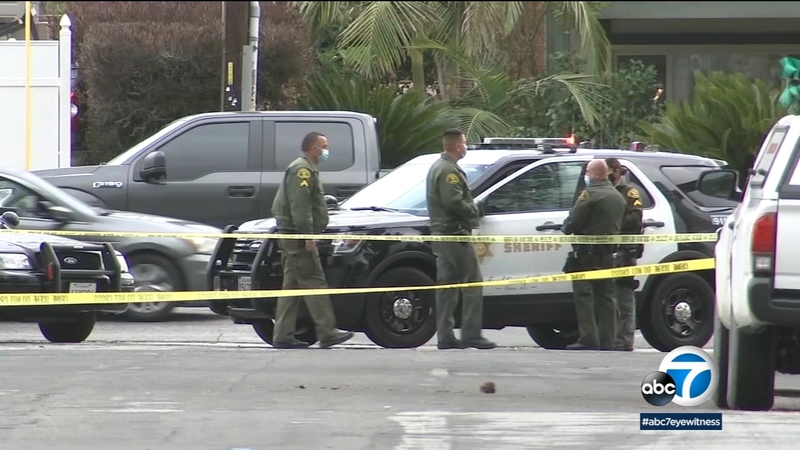 SAN DIMAS, Calif. (KABC) -- In an apparently random rampage, a woman and her dog were stabbed to death at a San Dimas park Thursday.

The suspect was subdued by another man at the park he had also targeted, who hit the attacker in the head with a rock and knocked him out.

Police and witnesses say the suspect, who was armed with a knife, first tried to attack another man who was walking near Lone Hill Park around 1:30 p.m.

When the man saw the suspect approaching with a knife, he fled and got into his own vehicle.

The man with the knife then turned his attention to a woman in her 60s who was walking by with her dog.

He first grabbed the dog by the leash and yanked it free of the woman's grasp, then started stabbing the pet, police say.

He then started stabbing the woman.

At that point, the first man who had originally been targeted returned to try to fend the suspect off. He grabbed a rock and threw it at the suspect, hitting him in the head and knocking him unconscious.

Unfortunately, when paramedics arrived, both the woman and her dog were declared dead at the scene.
The suspect was taken into custody and then transported to a local hospital for his head injuries. After treatment, he is expected to be booked for murder.

The suspect's name was not released, but he was identified as approximately 23 years old.

Tony Page said it was his son-in-law who was initially targeted and then subdued the suspect.

"Joe was sitting in his vehicle, watching this horrific thing take place," Page said. "The suspect at that point turned after killing the dog and started stabbing the lady. At that point Joe got out of his vehicle, looked for something. He found a rock, picked it up, he threw it, hit the suspect in the face, knocked him out. He was able to basically subdue and hold the suspect until authorities arrived."

He added that the intervention likely saved the lives of other people at the park.