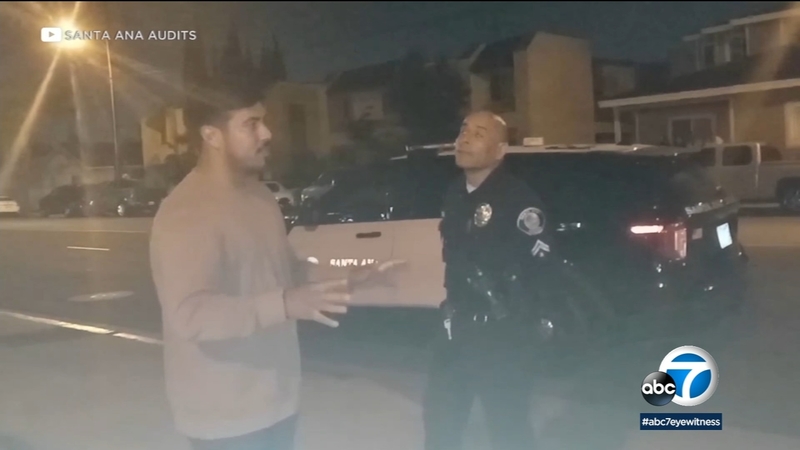 Santa Ana could ban police from playing music while on video

SANTA ANA, Calif. (KABC) -- The city of Santa Ana is considering whether to ban the controversial practice of police blasting copyrighted music to prevent videos of them from being posted to social media.

Officers have been using the tactic in response to efforts to record their interactions with the public and post them to YouTube among other platforms. Those sites typically scan videos and block any that contain copyrighted audio.

In one case, as Eyewitness News reported recently, an officer played Disney music from his patrol car at night loudly enough to wake up a neighborhood. A Santa Ana city council member happened to live nearby and confronted the officer.

A video posted on YouTube shows Santa Ana police officers waking up a neighborhood during an investigation Monday night as they blasted Disney music from one of their patrol vehicles to stop a YouTuber from recording on scene.

Councilmember Jonathan Hernandez could hear the music playing from inside his home around 11 p.m. on the night of April 4.

Police were investigating a stolen car when someone from a local community watch group started recording.

Disney music played in the background.

"I just remember thinking, you know, 'Is my daughter watching a movie? If she is, that is very loud,'" Hernandez said.

He went outside and confronted the officer, asking "why are you doing this?"

Gov. Gavin Newsom signed into law several criminal justice reforms Thursday, including a bill that would require police officers across California to intervene if they witness excessive force by a fellow officer.

"Why?" the officer said. "Because of copyright infringement."

The man taking the video on his phone interrupted the officer and said, "Because he knows I have a YouTube channel."

That's the kind of tactic that Hernandez wants to ban.

"Well I think the challenge that we're looking at here is we're starting to see that it's a practice occurring nationwide," Hernandez said.

This practice has become all too common. The Washington Post reported on an Alameda County officer in Northern California who played Taylor Swift in front of protesters in July of 2021.

Vice shared this Instagram post also from 2021, in Beverly Hills. The same officer, Sgt. Billy Fair, was filmed on multiple occasions playing music while having a conversation with a person filming and asking questions, a protected right under the First Amendment.

Beverly Hills police said this is not a procedure recommended by the department command staff.
The Alameda County Sheriff pointed out the irony to the Washington Post, reportedly saying "instead of censoring those filming, it went viral."

The exchange between Hernandez and the Santa Ana officer ended with a handshake. Hernandez hopes his proposed legislation can also be done in a collaborative way.

Attorneys for a man who died after being pulled over by the California Highway Patrol nearly two years ago are accusing officers of using excessive force following his arrest.

The councilmember plans to discuss the proposal at Tuesday's city council meeting.

A Santa Ana Police Department spokesperson told Eyewitness News when the video was released that the incident is under investigation.

The chief added, "My expectation is that all police department employees perform their duties with dignity and respect in the community we are hired to serve."