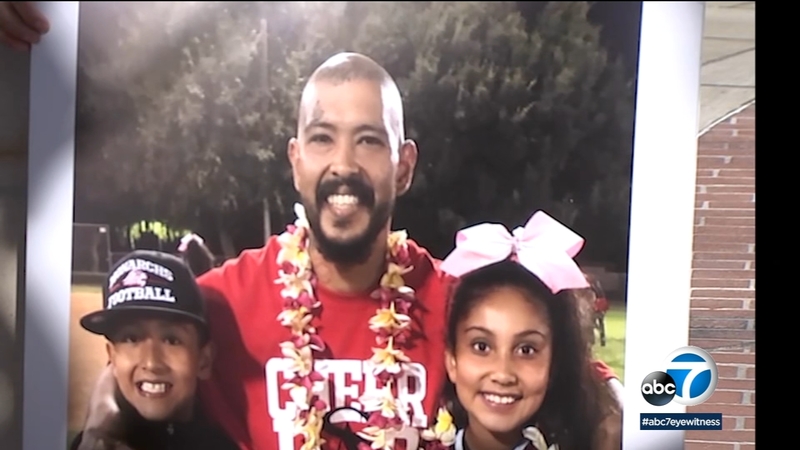 SANTA ANA, Calif. (KABC) -- The family of the man shot and killed by Anaheim police in late September is taking legal action against the city and the officers involved, seeking $20 million.

Antonio Lopez, the father of Brandon Lopez, says had he had the chance to speak with his son, he may still be alive.

In a video released by the Anaheim Police Department of the Sept. 28 shooting, officers are seen attempting to negotiate with Lopez.

Lopez sat in a car at an intersection in Santa Ana for more than three hours before the use of flashbangs.

In the footage, police are heard yelling out "gun" several times after Lopez ran out of the vehicle. Within seconds, officers opened fire, hitting Lopez multiple times.

Further investigation revealed Lopez was not armed. He leaves behind four children.

His mother, Johanna Lopez, spoke of the things her son never got to experience.

"Brandon will never have the chance to walk his daughter down the aisle or share in any future accomplishments his sons will complete," she said.

An armed robbery suspect was fatally shot by Anaheim police after a car and helicopter chase that ended in an hourslong SWAT standoff.

In a recorded statement from the city of Anaheim reacting to the claim filed Tuesday, spokesperson Mike Lyster points to Lopez's criminal record and his reckless driving in a pursuit hours before the shooting.

Officers had received a report Lopez took his girlfriend's Dodge Charger without her permission.

"We never want to see loss of life involving our police, but we believe our officers acted responsibly with a reasonable fear of what was made to appear as a gun," Lyster said.

Police released an image of a water bottle in a black bag they say Lopez had in his hand as he ran out of a the car.

"The complaint will lay out all the claims, including the pattern and practice that we see with the Anaheim Police Department in other cases of shooting (unnecessarily) - resorting to lethal force," Sarmiento said.

Santa Ana police assisted in this incident. In the police video, an officer is heard giving the dispatcher the code indicating Lopez had a gun in his right hand, "4-17 right hand, 4-17 right hand."

"There will be, at some point, the consideration to bring the city of Santa Ana into this action by filing a separate claim against them and eventually filing a lawsuit against both entities and all the involved officers," Galipo said.

The Lopez family says Santa Ana police rejected their attempts to speak with Lopez the night he was killed, and they want to see changes in police de-escalation and use of force practices so more families don't have to go through the same.

"They slammed me against the fence. I told them that that was my son. They told me, 'Shut the f up. That's not your son,' and I kept yelling at them that's my son, Brandon," Antonio Lopez said.

The attorneys plan to file their lawsuit in federal court lining out specific details at the start of next year.