The couple says they're considering taking legal action against Wag! when they came home to sick dogs and damaged furniture.
KABC
By Jessica De Nova 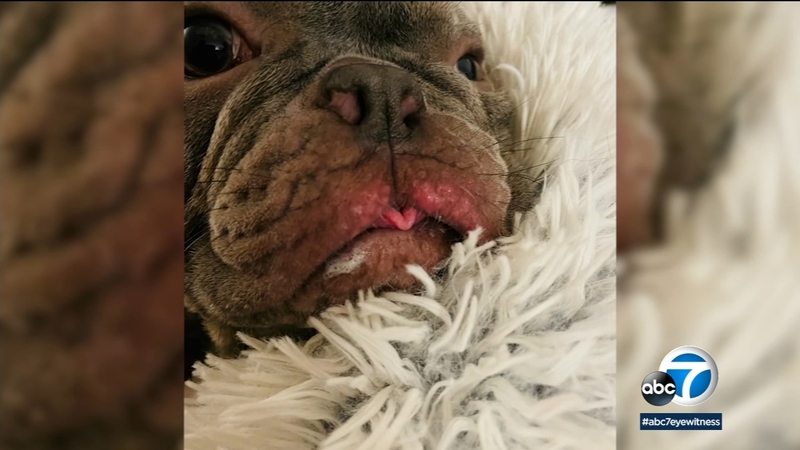 SANTA ANA, Calif. (KABC) -- A couple in Santa Ana is considering taking legal action against a pet sitting app after they came home from vacation to sick dogs and damaged furniture.

The couple went to Hawaii with their parents, who typically take care of their pets, and left behind their two dogs Jaxson and Grayson.

They said they turned to Wag! because they had used the app before to hire dog walkers.

"We did our due diligence," said Travis. "We made sure [the dog sitter] was five-star rated. She had over 125 reviews."

The couple said they came home from their week-long vacation and found mud and urine stains throughout their home and on their bed.

"I was hit by just a terrible smell of that wet dog smell," Eric said.

In addition, their French bulldog was found with a cut behind his ear and a rash on his face and paws. The couple said the two dogs were sick with diarrhea and vomited while they were gone. They said their veterinarian told them it's possible the dogs ate their own feces.

"Coming home to that and just the amount of guilt that we felt and how terrible we felt that we let this happen to our dogs, it's heartbreaking," Eric said. "We baby these dogs like they are our children. They're spoiled, anyone will tell you that."

After reviewing security videos and lock logs, the couple discovered the caregiver often left their dogs alone for more than the four hours, which the couple claims was not a part of their agreement.

It appeared she was gone for 13 hours on Halloween night.

"There was clear evidence that she had left our back door completely open and our house and dogs vulnerable," Travis said.

The couple said in the week after they reached out to Wag! with their concerns and tried to leave comments on their website, the company deactivated their accounts.

In a statement to Eyewitness News, a Wag! spokesperson said pet caregivers are required to pass tests on dog safety, equipment and handling and are required to undergo a criminal background check.

The company issued a statement saying in part, "This is an active investigation and we have suspended both parties from the platform while we review the case. If we uncover any impropriety, we will take appropriate action."

Meanwhile, the couple said they are speaking with a lawyer and hope other families don't go through a similar experience.

"We felt we were hiring the best through their company," said Travis. "There was no signs that we received any of that."