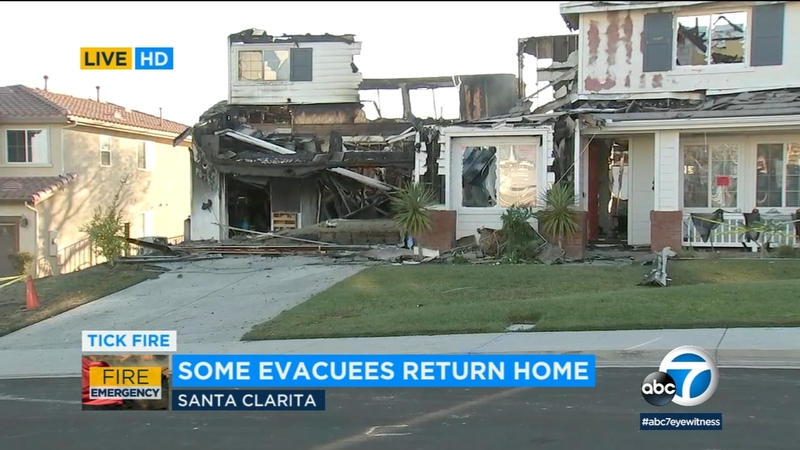 CANYON COUNTRY, Calif. (KABC) -- A large portion of evacuated residents due to the 4,615-acre brush fire in Canyon Country and Santa Clarita were allowed to return home over the weekend, though firefighters continued efforts Saturday to increase containment of the blaze.

The Tick Fire broke out around 1:24 p.m. Thursday in the area of the 31600 block of Tick Canyon Road just south of Summit Knoll Road. With strong Santa Ana winds and dry brush, it spread quickly as it burned downhill in medium to heavy brush.

Officials said at least 18 structures were burned, but that number may rise as firefighters are able to assess the damage. About 10,000 homes and other buildings were considered threatened by the flames.

As of around Saturday evening, the fire was 55% contained.

Some 40,000 residents were forced to leave their homes during the height of the fire but it's unclear how many remained evacuated.

All areas were being repopulated with the exception of the following mandatory evacuations:

The Tick Fire was one of multiple blazes that broke out across Southern California Thursday.

Only a few miles to the west, a fire erupted and began spreading in the Castaic area, damaging homes and threatening dozens more. Fires were also reported in Eagle Rock, Anaheim, San Bernardino and the Sepulveda Basin in the San Fernando Valley, among other locations.