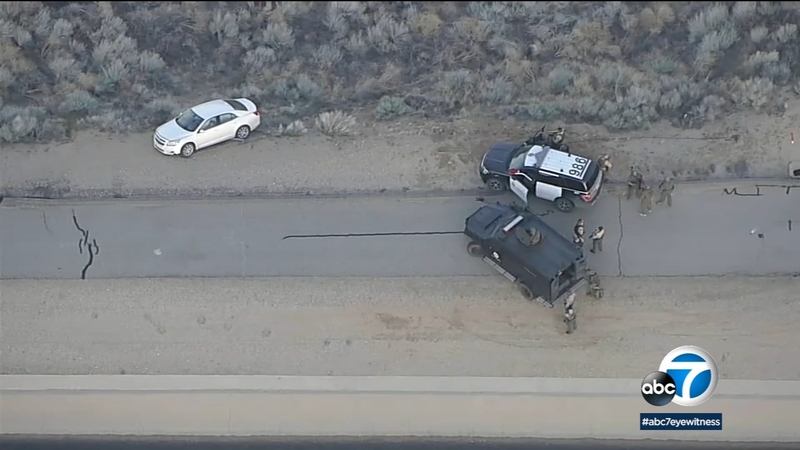 GORMAN, Calif. (KABC) -- A man suspected in the fatal stabbing of his estranged wife in Santa Clarita was taken into custody after an hourslong standoff with sheriff's deputies at the end of a chase in the Gorman area.

The suspect's estranged wife was stabbed to death at her Santa Clarita home Thursday morning, prompting a search for James Matthew Dorsey.

By the afternoon, authorities believed they had located Dorsey.

After a short chase, he crashed the victim's vehicle to the side of the road in the Gorman area near Los Alamos Creek and was remaining in the car in a standoff with sheriff's deputies. He appeared to be waving a knife inside the vehicle.

He remained inside the vehicle for hours. But by 10 p.m. the Sheriff's Special Enforcement Bureau reported he was in custody.

The stabbing was reported in the 22800 block of Fir Court in the Saugus community just after 5 a.m., according to the Los Angeles County Sheriff's Department.
The victim, who has only been identified as a woman in her 30s, was found with multiple stab wounds and was taken to the hospital where she was pronounced dead.

"Prior to dying, she identified her estranged husband, who we are naming as James Matthew Dorsey, as the person who stabbed her," Lt. Barry Hall said at the scene.

A woman was stabbed to death in Santa Clarita Thursday morning, prompting a search for the victim's estranged husband, authorities said.

Hall said Dorsey lives in Washington state and drove down to commit the murder.

"They were certainly estranged," Hall said. "He's not welcome at the house. He probably forced his way in through a door in the back."

The couple's three children were home at the time but did not witness the stabbing and were not injured, he said. Those children are now in the care of a family member.

Authorities say the 41-year-old suspect fled the scene in the victim's white four-door 2013 Chevy Malibu with a California plate of 7ALF904. He is considered armed and dangerous and the public is advised to refrain from approaching him if seen.

The Malibu was the vehicle involved in the standoff with deputies in the Gorman area.